Kyle Richards and Lisa Vanderpump‘s friendship hasn’t recovered from their rocky season of The Real Housewives of Beverly Hills.

During a Thursday night appearance on Watch What Happens Live with Andy Cohen, Richards said she hasn’t spoken to Vanderpump or her husband Ken Todd since a blowup at their house while filming season 9.

“The last time I spoke with Lisa or Ken was when I was at their house and we were going to have a talk, and then it ended up being a disaster,” she said. “When you’re kicked out of someone’s house … it was really strange for me because I’m so close with them.”

Richards, 50, said any attempts to contact Vanderpump, 58, have gone unanswered.

“I’ve sent a text and an email,” she said. “I don’t know if I’m blocked or supposedly blocked, but that’s the last time we spoke.”

While it’s unclear what sparked the fight, a glimpse of the heated exchange can be seen in the trailer for the upcoming season.

Later in the trailer, Richards distances herself from her longtime friend.

“I’m not responsible for Lisa Vanderpump‘s actions,” she says.

The women have been close friends since RHOBH premiered in 2010. In recent interviews, Vanderpump has demurred when asked if she’s quitting the reality show but confirmed she opted out of shooting group scenes after a big blow-up.

“It’s my ninth season and I had a very difficult year and after doing Vanderpump Rules and opening a new business, things got very complicated. So I’m in most of the season, but it got a bit complicated,” she said on The Talk in November. 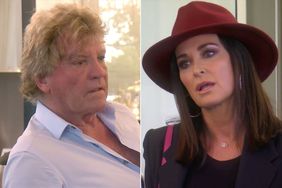