"But one could argue, perhaps, that maybe her memory is fading along with her relevance," Richards, using a British accent, said on WWHL

During her appearance on Watch What Happens Live with Andy Cohen Wednesday, Richards responded to Vanderpump's claim that she spread rumors about Erika and Tom Girardi's financial woes at Andy Cohen's baby shower in 2019.

"Okay, first of all, everyone who knows her texted me and said, 'What a joke,' including people involved in this," said Richards, 52.

The Real Housewives of Beverly Hills star then decided to formally respond to Vanderpump's claim by delivering her best impression of her former costar.

"I mean, Andy. I would never say something like this. Ever," the Halloween Kills actress began, adopting a British accent. "But one could argue, perhaps, that maybe her memory is fading along with her relevance, because she wasn't even at the baby shower! But I would never say something like that. You can think about that, though. I'm just saying."

Dropping the accent, Richards exclaimed: "She wasn't there!"

Earlier this week, Vanderpump, 61, said in an interview with DailyMailTV that Camille Grammer had told her that Richards had previously spread rumors about the Girardis.

"It didn't surprise me when Camille told me that it was Kyle that had told her the gossip about her supposed friend Erika Jayne," she said. "That's how Kyle works."

Erika, 50, filed for divorce from the former attorney, 82, in November 2020 after 21 years of marriage. In the months since, the two have become embroiled in a series of legal controversies, including a lawsuit accusing the former couple of embezzling settlement funds that belonged to Tom's clients.

On Wednesday's episode of RHOBH, Erika claimed she had "zero dollars."

"I'm out here rebuilding my life," she told Richards. "But girl, I have zero dollars. And by the time those trustees are done with [Tom], he'll be nothing. So I walk out of this with nothing. And I said that to my lawyers the other day, I said, 'I expect nothing.' And one of my lawyers looked at me and he goes, 'That is the most courageous thing I've ever heard.'" 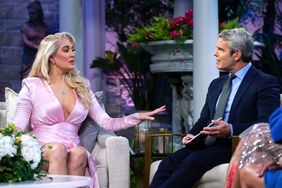