And just like that, Keeping Up with the Kardashians has come to a close.

Thursday's episode of the iconic reality series was the last after 20 seasons on E!, but it was still filled with the usual KarJenner family antics, relationship drama and bittersweet moments.

In one emotional scene, mom Kris Jenner confronted Kim Kardashian about how she was feeling amid her relationship struggles with then-husband Kanye West. (The couple have since split, and Kim, 40, filed for divorce in February after filming wrapped.)

"I'm going to a therapist," Kim told her mom after she expressed that she was "worried" about her. "Let me work on myself and see where I'm at — and that's what I'm so excited for, just like, waking up at 40 and realizing like, I just want total happiness."

"I know obviously complete bliss is like, not a full reality, but if I can have it more of the majority of the time, that's all I want to do, wherever that takes me," she continued. "I just want my pure happiness, so that's what I'm working on figuring out how to get there. I just feel like I've worked so hard in life to achieve everything that I've wanted to, and I've lived up to my expectations and achieved 10 times more than I even thought was humanly possible."

"But I don't have a life to share that with," Kim said, referencing her loneliness in her relationship with Kanye, 43. "Like, I do — obviously my kids and everything — but am I just gonna sit here and think, 'Okay, my kids fulfill me, and I'm good?'"

Kim and Kanye share four children together: daughters North, 7½, and Chicago, 3, and sons Saint, 5, and Psalm, 2.

She then told Kris that Kanye always being away, specifically at his Wyoming ranch, began to take a toll on her.

"I never thought I was lonely ... I always thought that's totally fine, I could just have my kids, my husband moves from state to state," she said. "And I just am on this ride with him, and I was okay with that and then after turning 40 this year, I realized like, 'No, I don't want a husband that lives in a completely different state to me.' I thought, 'Oh my God, that's when we're getting along the best,' but then that is sad to me, and that's not what I want."

"I want someone that we have the same shows in common," she added. "I want someone that wants to work out with me every single day ... the little things are what I don't have. I have all the big things. I have the extravagant, everything you could possibly imagine — and no one will ever do it like that, I know that, you know what I mean? And I'm grateful for those experiences — but I think I'm ready for the smaller experiences that I think will mean a lot."

Kim Kardashian Talks Kanye West on KUWTK Finale: 'I Didn't Come This Far' to 'Not Be Happy'

"I just want you to be happy and joyful," Kris, 65, advised her daughter. "And I think I haven't seen that in a really long time."

Listen below to our daily podcast PEOPLE Every Day for more on the KUWTK finale.

"Yeah, and I'm ready too, whatever that is, like, I'm not rushing it. I'm not like, I don't have any final decisions that I want to make," Kim said.

"Don't cry," Kim then told her mom. "So much to be happy about! I'm not like, gonna have a breakdown and cry when you leave. I'm numb like, I'm tired of that, but I do know that I will be happy. I didn't come this far just to come this far, and not be happy."

Kim Kardashian on Why She Addressed Her Sex Tape on KUWTK: 'I Wasn't Gonna Hold Back'

Later, Kim revealed that she was "totally bummed" to have failed the baby bar exam for a second time as she continued to pursue law school — but the KKW Beauty mogul said she was going to keep trying.

Earlier in the episode, Khloé Kardashian grappled with whether or not to move to Boston with beau Tristan Thompson, who had recently signed with the Celtics.

"It's definitely weighing on me to figure out what to do," she told the cameras. "Tris and I are in a way better place than we were before, but I'm still trying to navigate my way through my feelings, and I don't know if I really had time to think about what moving would mean for our relationship."

After she chatted with the basketball star, Khloé, 36, seemed to be leaning towards moving with their 3-year-old daughter True.

"Tristin is right, there's not a huge reason why I couldn't move to Boston for the NBA season. I basically don't even have a real place to live, so it's the perfect time to move to Boston," she said, referencing the fact that her home in California was under construction.

Finally, noting that she was feeling "more open to the idea of a future with" Tristan, 30, Khloé decided to make the move.

"I feel really good about my decision to move to Boston for the NBA season, you know, we've spent so much time together during COVID that I think it will be really special for all of us," she said. "This is such an exciting time and I can't wait to see what the future holds for my family."

Eldest sister Kourtney Kardashian, meanwhile, sat down for a long overdue chat with ex Scott Disick about the nature of their relationship. Kourtney, 42, told Scott, 38, that the pressure her family was putting on her to get back together with him was unfair.

"I'm not going to be made to feel guilty when the things that I've asked of you haven't been done," Kourtney told Scott, with whom she shares three children: sons Mason, 11, and Reign, 6, as well as daughter Penelope, who turns 9 next month.

"But everybody in your family says to me like, 'You need to be with Kourtney' and stuff. Like, I get those pressures, too," Scott said.

"Then you can say back to them too, 'I've been asked to do this, I haven't. So, like, it's not happening,'" Kourtney advised.

"I think it's a lot of pressure when the whole family wants us back together. Kourtney needs certain things from me that I haven't still been able to provide her, and, you know, I think maybe we have to both realize that maybe we won't be together and we need to move on completely," Scott told the cameras.

"I guess the truth is deep down, I like to hear them saying, 'We want you to be with our sister too,' and I need to be more honest with them," he then said to Kourtney.

"The fact that we have what we have is amazing," he continued of his co-parenting relationship with his ex. "And I just want to be thankful for that instead of always thinking there's more. I mean, you know, we love each other, we trust each other, we care about each other, we have kids together, and our kids are happy, and things are going fine — so for right now, this is where our lives are and it's very, very good."

"My whole thing is, I just want you to be happy and feel good. I could never ask for anything else," Scott said, as Kourtney concluded, "And I'm here to help and support you in any way, but life moves on."

At the close of the finale, the entire family — Kris, Kim, Khloé, Kourtney and Scott, as well as Kylie and Kendall Jenner — gathered to bury a time capsule in honor of the show.

"We are all here, adding our contributions to that time capsule. I have all of the video interviews, and every family member has something that they would know in 10 years, five years, when we dig this up, will bring them back to something about the show," Khloé said, noting that she had captured short videos of each of her family members that she was burying in the capsule.

The momentos included a "Lord Disick" cape from Scott, Kim's first fragrance, Kylie's lip kits, a framed photo of the home they started filming in, and a copy of Kris' "Momager" certificate.

"I feel like this is a beautiful tribute to say goodbye to Keeping Up," Khloé said.

"It's been quite a ride, a lot of ups and downs, unbelievable times that I'll never forget," Scott said as the episode came to a close.

"I don't even know what life is like without filming this show," said Kylie, 23, while Kendall, 25, added, "I just loved every moment. I just want to be able to stop time and live right here."

"It's just so crazy how much I've gone through with all of you guys by my side," Khloé told the cameras. "They're not all amazing things, but they're all life lessons. I feel like I've grown so much. It just shows that if you hold true to who you are, things will always get better."

Kim then reflected on how much she has changed since season 1 of KUWTK debuted in 2007.

"Season 1 Kim, I was so different," she said. "Waking up and having a different idea of what happiness looks like is an amazing surprise. I have no regrets. This was like, the best decade and a half of my life."

"The show has really meant so much to me because I feel like without the hard moments, there's no growth," added Kourtney.

"This is a period in my life that has meant so much to me when I think about season 1 to season 20," Kris then said through tears. "Those are my most magical memories."

"No one knows what tomorrow's going to bring, but I have a grateful heart for all of our fans and all of our followers who have been so loyal. Thank you," the family matriarch concluded. "Just thank you."

But it's not quite over for fans — part 1 of the Keeping Up with the Kardashians reunion, hosted by Andy Cohen, premieres June 17 at 8 p.m. ET on E! 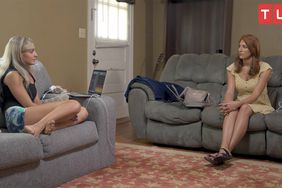 'Welcome to Plathville' : Moriah Chooses Sister-in-Law Olivia Over Parents to Attend Her Concert