Kristen Bell and Dax Shepard have no problem being open about when they're not on the same page.

On Sunday, Bell, 41, shared a few videos of her latest conversation with her husband, where he hilariously "busted" her on leaving toilet paper on the seat after using the bathroom.

"What was the intention?" Shepard, 46, asks Bell in the first clip, showing a piece of toilet paper sitting on the toilet seat. "Was it to be in the toilet bowl or in the trash can because now that I have to finish the task you started, I just want to make sure I do it correctly."

The actress responded, "Obviously, I didn't care," as she pushed the tissue into the toilet and the couple laughed. "Good to know. And in the future, always, that's where it was supposed to go?" he responded.

The Frozen star then added, "It was dark in here," before Shepard joked, "It's dark in here a lot apparently because that happens, I don't know, four, five days a week."

In a second video, Bell said, "Peeing is such a waste of time, so when I'm in there, I'm just looking to get off as quickly as possible and wrap it up." Her husband followed up adding, "And you just let the toilet paper go wherever it goes?"

In a third video, Shepard continued to explain to his wife, "You have to imagine how many times I've seen that before I decided to say something," before she sweetly apologized with a laugh. The clips were posted on Bell's Instagram, where she captioned the post, "I got busted by @daxshepard. But Peeing IS a waste of time, and [I] stand by that statement."

Bell and Shepard — who married in 2013 and share daughters Delta, 6, and Lincoln, 8 — have been very candid about the ups and downs in their marriage, including the quirky and fun moments they share with each other. While appearing virtually on The Ellen DeGeneres Show in June, the actress opened up to guest host Chelsea Handler about her relationship and how they use solo therapy sessions to keep their relationship strong.

"At the beginning of the pandemic, we were at each other's throats. And then all the doors locked in our house, like, we had to stay inside, and we were like, 'Woof. We need to get a handle on the annoyances,'" Bell said. "And our therapist Harry ... suggested that since we were both so annoyed with each other ... we go to therapy separately so that we could talk s--- about each other."

The Bad Moms star continued: "And we did, and it's been great. Currently, right now, what we've been doing the last couple of months is every two weeks or so, I'll see Harry via Zoom and complain about Dax, and then he'll give me all the reasons why I'm wrong and then Dax will do the same. And then, by the time we meet up in the evening, we love each other again." 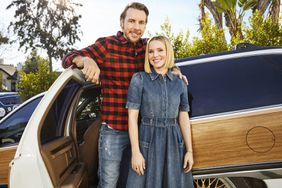