Kristen Bell and Dax Shepard are taking their partnership to the small screen.

The married actors are set to host and compete in Family Game Fight, a new NBC game show featuring fun competitions with a big cash prize up for grabs, the network announced Wednesday.

Family Game Night marks Bell and Shepard's first joint TV project. The show is based on their past antics on The Ellen DeGeneres Show, including their hilarious game of "Taste Buds" in 2019.

"For one of our first dates, I invited Dax over for a game night at my house with a bunch of friends," Bell said in NBC's press release. "He said he fell in love with me there because I was a very tiny person bossing everyone around. I fell in love with him too because he's a very large person who could boss everyone around, but chooses not to. I'm so excited to host 'Family Game Fight' and play all day with my best friend."

"Kristen is my favorite human to work with," said Shepard. "She's the most consistently funny, playful and joyful scene partner I've ever had. She's also incredibly fun to look at."

The couple, who share daughters Lincoln, 7, and Delta, 6, also teased the upcoming series during an appearance on The Ellen DeGeneres show on Wednesday.

"When I play games and get very competitive, I go fully offline," Bell explained "And that's fun. It's interesting for the viewer, it's interesting for my husband. As long as we leave this show still married, I think it's going to be great."

"We're very excited," the Good Place star said, adding that both she and Shepard's families will be competing on the show.

"Most importantly, we will be battling one another in the name of our families quite often, and we think that will be pretty amusing for everybody," Shepard said.

Family Game Fight is now casting family teams of four. To submit your story or nominate a friend, co-worker, or family member,visit www.Venertainment.com.

Kristen Bell Jokingly Says Seeing 'Magic Mike Live' Was as Good as 'Having My Children, Getting Married' 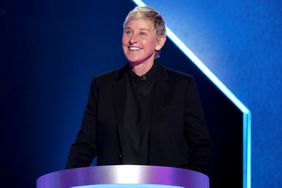