During an On-Air With Ryan Seacrest appearance on Thursday, Jenner shared her thoughts on her eldest child's relationship. "Isn't it great?" Jenner, 65, said. "I know, it's the best."

Jenner was also asked to clarify a post Kardashian shared on her Instagram Story earlier this week, when she re-posted a photo of a vial of the Blink-182 drummer's blood.

"Here's the thing, I don't know what that means," the mother of six said. "I've got to have a little chat with Ms. Kourtney and find out what's going on."

PEOPLE confirmed in January that Kardashian, 41, and Barker, 45, are dating. They later made their relationship Instagram official in February — after they celebrated Valentine's Day together — sharing a photo of the pair holding hands.

Since then, Kardashian and Barker have not shied away from showcasing their love for one another publicly. The couple have appeared in TikToks alongside their children, bonded while Kardashian tattooed him, and shared PDA-filled posts to Instagram.

Barker, who has a tattoo of Kardashian's name, additionally called the Poosh founder the "love of my life" following the pair's trip to Disneyland.

Earlier this year, a source told PEOPLE that Kardashian was "ready for a relationship with a more mature guy." Kardashian and Barker "have a long, long history and years of friendship" and have "felt like family for years," the insider added.

Kardashian shares sons Mason, 11, and Reign, 6, and daughter Penelope, 8, with Scott Disick. The exes, who split in 2015 after dating on and off for nearly a decade, have remained close as they continue to co-parent their children.

In a sneak peek at Keeping Up with the Kardashians' upcoming reunion special, Kardashian said she believes it's possible the former couple's relationship could have turned out differently had they not shared so much of it on TV. "But I think the substance abuse was the deal-breaker," Kardashian added while referencing Disick's addiction struggles, leading the Talentless creator to respond, "I was pretty irresponsible."

Barker, for his part, shares son Landon, 17, and daughter Alabama, 15, with ex-wife Shanna Moakler. Last month, Moakler told PEOPLE that she has "no ill will" toward Barker and Kardashian but called their PDA "weird." 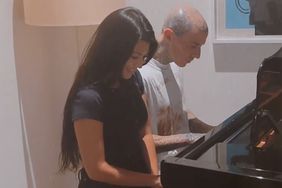