"Scott has always had a difficult time accepting that Kourtney is happy with someone else," a source tells PEOPLE

Kourtney Kardashian is "not shocked" by Scott Disick's alleged reaction to her PDA-packed photos with boyfriend Travis Barker, a source tells PEOPLE.

On Monday, Kardashian's ex-boyfriend Younes Bendjima posted a screenshot of an alleged Instagram direct message he claimed to have received from Disick, 38, in which the Talentless creator appeared to make a dig at Kardashian.

A source tells PEOPLE Kardashian, 42, believes Disick did send the DM to the Algerian model.

"She was surprised, but not shocked," the source says. "Scott has always had a difficult time accepting that Kourtney is happy with someone else. He is especially threatened by her relationship with Travis."

For more on the drama between Kourtney Kardashian, Scott Disick and Younes Bendjima, and other top stories, listen below to our daily podcast PEOPLE Every Day.

"Yet, he and Kourtney have been getting along," the source continues. "Kourtney is disappointed that he engages in drama when they have been doing well co-parenting. She doesn't get why he felt the need to reach out to Younes. She will confront him about it. For now, she continues to enjoy her trip with Travis."

In the message to Bendjima, Disick allegedly sent a photo of Kardashian straddling Barker and wrote, "Yo is this chick ok!???? Broooo like what is this. In the middle of Italy."

Bendjima, 28, allegedly responded: "Doesn't matter to me as long as she's happy. P.S. I ain't your bro."

He then shaded Disick further in a note he added to the screenshot. "Keep the same energy you had about me publicly, privately," he wrote. "Couldn't miss this one. He [had] been playing around for too long, [I'm too] tired to stay quiet and be the nice guy."

Barker, meanwhile, seemingly reacted to the news by posting a picture on his Instagram Story of Ray Liotta's character from Goodfellas laughing hysterically.

Kardashian previously dated Bendjima for over a year before they broke up in August 2018. They briefly reconciled in 2019 before eventually calling it quits again.

Disick, who is currently dating Amelia Gray Hamlin, split from the Keeping Up with the Kardashians star in 2015 after dating on and off for nine years.

PEOPLE confirmed Kardashian and Barker's relationship in January. A source later said that Disick was "struggling" with his ex's blossoming romance with the Blink-182 drummer.

"Before Travis, Kourtney's relationships were never serious. It was more like flings. With Travis, it's different," the source said in April. "Scott was pretty shocked when he found out that they are dating, and he can tell that they have moved very quickly. His kids love Travis, which is also hard for Scott."

During the KUWTK reunion in June, Kardashian and Disick wished each other well when addressing their respective relationships.

"I think if you really love somebody, you want them to be happy no matter what. So I do give her a blessing to be happy," Disick said, to which Kardashian added, "Whoever would make him happy, I would give my blessing." 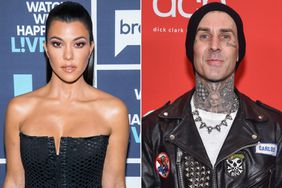