Kourtney Kardashian and Travis Barker have been linked since January

Kourtney Kardashian isn't shying away from telling boyfriend Travis Barker exactly what she wants from him.

On Monday, Barker, 45, shared multiple candid shots on Instagram of himself alongside Kardashian, 42, smiling while holding hands. The Blink-182 drummer captioned the post with a male and female vampire emoji.

Commenting beneath Barker's photos, the Keeping Up with the Kardashians alum wrote: "I want to suck your blood."

In response to her comment, Barker replied, "@kourtneykardash My favorite 🩸."

Kardashian also shared similar pics to Barker's in her own Instagram post, which she captioned: "Swipe for happy girl."

The couple just enjoyed a trip to Las Vegas, where they attended the UFC 264 fight on Saturday. For the event, Kardashian rocked a shiny, silver halter top and a black mini skirt while Barker wore a white tank that he paired with a leather jacket, a black beanie and a metallic skull necklace.

PEOPLE broke the news in January that Kardashian and Barker are dating. At the time, an insider said that the pair had "been dating for about a month or two" and were "friends for a long time but it's turned romantic."

Since making their romance Instagram official in February, Kardashian and Barker have continued to showcase their love for each other across social media. The rocker recently referred to Kardashian as his "baby" while responding to a set of PDA-filled photos on Instagram last month.

The Poosh founder shares sons Mason, 11, and Reign, 6, and daughter Penelope, 9, with ex Scott Disick. The pair dated on and off for nine years before splitting for good in 2015.

During the KUWTK post-finale reunion last month, Kardashian and Disick — who is now dating Amelia Gray Hamlin — acknowledged what most impacted their relationship. "I mean, the infidelity, I only knew about it at the end. So I think the substance abuse was the dealbreaker," Kardashian said while Disick, 38, added, "I don't want to make any excuses for my behavior. I definitely wouldn't have done these things sober. But it was all wrong, and I just thought it was normal, to be honest."

Listen below to our daily podcast PEOPLE Every Day for more on Kourtney Kardashian and Travis Barker. 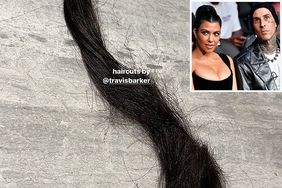