It's been a decade since the world was first introduced to the Real Housewives of Atlanta star, who rings in her 40th birthday on Saturday

Wearing a black-and-white dress, Kim Zolciak (she added "Biermann" to her surname after marrying husband Kroy Biermann in 2011) poses for her Real Housewives of Atlanta portrait in 2008.

Kim reaches for her drink during an early appearance on Watch What Happens Live.

One year after being catapulted to fame with the premiere of Bravo's RHOA, the reality star attends a Golden Globes afterparty in 2009.

2009 also served as the year Kim — with the help of superstar songwriter and RHOA castmate Kandi Burruss — released "Tardy for the Party," her first single that quickly became one of the most successful songs by a Real Housewives member in the franchise's history.

Anyone who has seen an episode of the Real Housewives of Atlanta and Don't Be Tardy knows it's no secret Kim has a penchant for sporting a variety of blonde wigs. "Wigs are just easier and I love the versatility!" the star wrote on Instagram of her extensive collection.

Kim shows off her toned physique in a jumpsuit on Good Morning America in 2015.

Following a 2017 appearance on Watch What Happens Live, Kim is seen holding her wine-filled red solo cup — a signature accessory of the star's.

"Makeup, the contouring and what have you, definitely [helps]," Kim told Entertainment Tonight when asked about her plastic surgery. The reality star kept things real, admitting to having had her lips done and getting botox. She denies getting a nose job, however, debunking those rumors during the same interview.

"Why would I not talk about a nose job? Actually, let me show you — my septum is completely out," Kim said. "So, if I had a nose job, I definitely wouldn't have a septum that's hanging out over here. But, I will fix that at some point if I have a breathing problem." 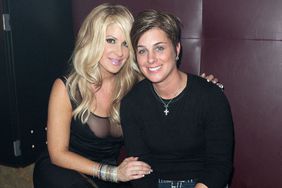