Kim Richards‘ ex-husband has come to her defense for the second time this month.

Monty Brinson, who previously spoke out after the Real Housewives of Beverly Hills star was arrested for allegedly shoplifting at the beginning of August, wrote a long, heartfelt Instagram post about his ex-wife on Monday.

“One day the people that didn t believe in you will tell everyone how they met you. That quote is in honor of @kimrichards11,” he wrote. “All I will say at this time besides being best friends, and personally a person who has a great heart is thankful to all her fans and friends for believing in her.”

Brinson, who is battling cancer, revealed that he has not seen Richards, 50, but is speaking to her every day.

Earlier this month Brinson, who divorced Richards in 1988, spoke to Entertainment Tonight after the reality star was reportedly caught shoplifting by a Target security guard.

“I couldn’t imagine Kim stealing or shoplifting anything. She is a giver,” Brinson said. “I am in complete shock. Guaranteed this must be some kind of mistake, and the facts will come out soon. This was not alcohol- or drug-related.”

Brinson added in his post that the former child star will be back at work soon.

“Her fans that have stayed with her through this roller coaster will see her very soon at what she’s done best all her life since the age of 4.”

It’s unclear what Brinson was referring to, but Richards will not be returning for next season of Real Housewives.

Regardless, Brinson believes the future is bright for his ex.

“I’m excited for her,” he wrote. “And personally I would like to thank everyone who stood by her through this rough time. Remember everyone in life goes through a rough time one way or another. I always say know the facts before being judgmental.”

Dave Coulier Reveals He's 2 Years Sober: 'I Loved Booze, but It Didn't Love Me Back ' 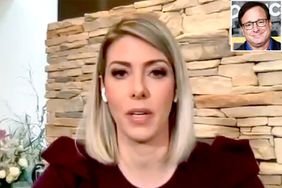