Before her time on Keeping Up With the Kardashians, the reality star appeared on the MTV series alongside stepbrother Brody Jenner

Before she was the star of Keeping Up With the Kardashians, Kim Kardashian West made a debut on another hit reality show – The Hills!

A decade after the premiere of the hit MTV series, the network revealed unseen footage of Kardashian West’s cameo during its 10-year anniversary special Tuesday night, The Hills: That Was Then, This Is Now.

As audiences watched Hills star Lauren Conrad explain the behind the scenes drama that stirred throughout six seasons of the reality program, viewers were also given a peek of Kardashian West – who was not yet world-famous – receiving a tour of Heidi Montag‘s home.

“This is our arcade room now,” Montag says to Kardashian West in the video. As the duo walks across the living room, Kardashian West says hello to friends at the party and waves: “Hi Frankie, hi Olivia. How are you?”

The special then shows the pair standing in front of Montag’s aquarium. “What is this?” Kardashian West asks.

“These are our jellyfish,” Montag is quick to explain. “We’re the only people in America to have jellyfish.”

“This is really cool. No way,” Kardashian West excitedly exclaims in the cut scene.

The camera then skips to footage of Kardashian West chatting with stepbrother Brody Jenner who also attended the gathering. ” What are you doing for Memorial Day?” she asks Jenner.

MTV’s cameras then skip to unaired footage of Montag and Kardashian West chatting again. “Are you going to the VMAs,” Montag asks. “Yeah I am. I leave for Vegas in the morning,” Kardashian West responds. 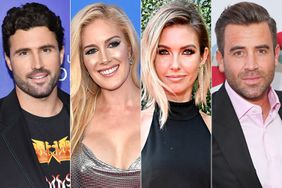