Did Taylor's Song Cause Kim Kardashian to Ban the Snake Emoji on Her Instagram?

In the wake of Taylor Swift releasing her first single, Kim Kardashian has banned commenters from using the snake emoji on her Instagram

Kim Kardashian would like to be excluded from this narrative.

Ahead of Taylor Swift releasing her first single since Kardashian leaked a phone call between the “Shake It Off” singer and her husband Kanye West on Snapchat, the reality star, 36, banned commenters from using the snake emoji on her Instagram.

In the edited clips of the call, the pop star appeared to give West her blessing for his “Famous” lyrics. But on Instagram, Swift asserted that West, now 40, never told her he was going to call her “that bitch” in the song. “You don’t get to control someone’s emotional response to being called ‘that bitch’ in front of the entire world,” she wrote. “He promised to play the song for me, but he never did.”

But now she’s embracing the snake image and using it to promote her new music. Swift teased her latest single, “Look What You Made Me Do,” with video clips of a CGI snake and is selling slithering merchandise in support of her upcoming Reputation album.

To seemingly get ahead of the backlash, Kardashian took advantage of Instagram’s feature that allows users to block certain words, phrases, and emojis from their feeds. Swift fans have taken notice, resorting to leaving dragon emojis in Kardashian’s comments, writing out the word “snake,” and quoting lyrics from the Grammy winner’s new single.

Swift, 27, has turned off commenting on all of her own Instagram posts, which come after she wiped her social media platforms clean Aug. 18.

Though Kardashian no longer wants to deal with snake emoji, the mother of two embraced it last summer on National Snake Day.

“Wait it’s legit National Snake Day?!?!?” she tweeted in July 2016 with 37 snake emojis. “They have holidays for everybody, I mean everything these days!” 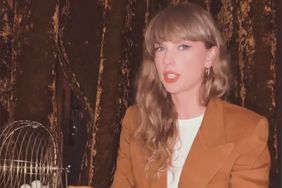