"I love their relationship — they've grown so much together," said Kim

During her appearance on Thursday's episode of The Ellen DeGeneres Show, the star was asked whether Barker, 45, might appear on her family's upcoming Hulu project. Kim, 40, said it's definitely a possibility, seeing as the Blink-182 drummer is "such a big part" of Kourtney's life.

"I love their relationship," she told host Ellen DeGeneres. "They've grown so much together. ... Just to think that they've been neighbors and friends for almost 15 years. Neighbors for like, a decade!"

DeGeneres then joked about how Barker and Kourtney, 42, haven't been able to "keep their hands off each other" since going public with their relationship. "They are at each other like it's the last time they're going to see each other, all the time!" she said.

Laughing, Kim said the couple's PDA is "so cute."

Sources told PEOPLE in January that Kourtney and Barker had been dating "for about a month or two." After publicly confirming their relationship around Valentine's Day, the stars have famously engaged in PDA on a number of occasions.

Recently, Kourtney and Barker's PDA allegedly drew criticism from her ex Scott Disick — with whom she shares sons Mason, 11, and Reign, 6, and daughter Penelope, 9.

In an alleged Instagram direct message leaked by Kourtney's ex Younes Bendjima, Disick, 38, shared a photo of Kourtney and Barker kissing in Italy. "Yo is this chick ok!???? Broooo like what is this," he wrote. "In the middle of Italy."

Bendjima, 28, allegedly responded: "Doesn't matter to me as long as she's happy. P.S. I ain't your bro."

Following Barker's recent trip to Europe with Kourtney, the musician opened up about how the Poosh founder has been a positive influence in his life. (He recently flew with her for the first time since surviving a deadly plane crash in 2008.)

"Having something that gives me the strength and hope to be able to overcome things that were so traumatic in my life, it just says a ton," he told Nylon earlier this month. "She's definitely that for me. I'm invincible when I'm with her. It's like I never dreamed, I never even considered flying again."

Kourtney Kardashian's Kids React to PDA with Travis Barker: 'Can You Guys Not Kiss in French' 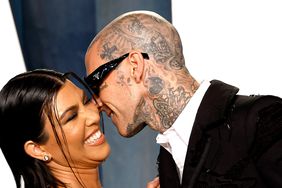 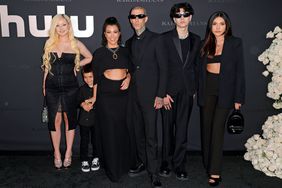