Dressed in an all-pink ensemble, the Keeping Up with the Kardashians alum, 40, kicked off her Saturday Night Live hosting debut with an irreverent monologue referencing her public persona, as well as her famous family, including estranged husband Kanye West.

"I'm excited to be here tonight to show you guys that I'm so much more than just a pretty face and good hair and great makeup and amazing boobs and a perfect butt," she said. "Basically, I'm just so much more than that reference photo my sisters showed their plastic surgeons."

"But the one thing I'm really proud of is that no one can ever call me a gold digger," Kardashian West continued. "Honestly, I'm not even sure how you become one. So I asked my mom's boyfriend Corey [Gamble]."

"Now I know we're divided as a country, but I'd love America to come together, which is why I'm here to announce that I'm running for," she began, adding, "I'm just kidding, guys! I'm not running for president. We can't have three failed politicians in one family."

Kardashian West, who filed for divorce from West in February, later brought up her marriage to the Yeezy designer, 44, as she joked about their high-profile breakup.

"I've been very blessed in this life, and I'm grateful for everything, honestly, all the ups, all the downs," she said. "I mean, I married the best rapper of all time. Not only that, he's the richest Black man in America, a talented, legit genius, who gave me four incredible kids."

She continued, "So when I divorced him, you have to know it came down to just one thing: his personality. I know it sounds mean, but people keep telling me that comedy comes from truth. And if there's one thing that I always strive to be, it's genuine."

A source previously told PEOPLE that the reality star was feeling the pressure ahead of her big moment on SNL. "She's both nervous and thrilled," the source said. "It's a huge deal for her. She takes the hosting gig very seriously."

According to the source, Kardashian West "has been chatting" with West about the gig. "He's giving her advice," the source said. "She feels a lot of pressure. She wants to wow the audience."

Though the stars officially split in February when Kardashian West filed for divorce, she has continued to publicly support the rapper, including appearing in a recreation of their 2014 wedding at a controversial listening party for his album Donda in August.

Hours before taking the SNL stage, the SKIMS founder was photographed leaving her N.Y.C. hotel with West.

She stunned in another all-pink ensemble featuring a large puffy coat and matching gloves, while he slipped out dressed in black after a quick stop in Los Angeles.

Kardashian West's hosting gig was announced last month ahead of the season 47 premiere on Oct. 2. "OMFG no turning back now!!!!" she tweeted at the time. "LOL I'm hosting SNL!!!!!! @nbcsnl." 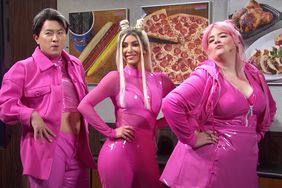 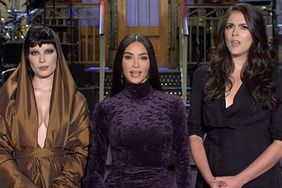 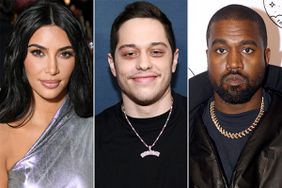