"It's very stressful for her because she doesn't know when it will stop and what he will do next," a source tells PEOPLE

Kim Kardashian West is putting on a public display of support for her husband Kanye West amid his ongoing feud with Drake — but behind the scenes, the mother of three is grappling with stress.

“Kim will always be supportive publicly of Kanye,” a source tells PEOPLE of the Kimoji creator, 38. “She believes this is what she needs to do as his wife. They are a team and she will stick up for him.”

But “that doesn’t mean that Kanye’s drama doesn’t affect her negatively,” the source adds.

On Thursday, the Chicago rapper, 41, took aim at Drake, 32, on Twitter, tweeting over 125 times and claiming Drake threatened him, Kardashian West and their children North, 5, Saint, 3, Chicago, 10 months.

“You threatened the safety of me and my family,” West tweeted. “You tried to hurt my pockets.”

RELATED: Kanye West Says Drake Is Threatening Him and His Family in Explosive Twitter Rant: ‘Leave Me Alone’

According to the source, Kardashian West “can’t stand when he starts drama like this.”

“It’s very stressful for her because she doesn’t know when it will stop and what he will do next,” says the source .”She has no control over his social media drama.”

The source adds that West doesn’t communicate with his wife before he publishes his tweets.

“It’s not like Kanye consults with Kim before he tweets,” the source says. “It seems it’s the unpredictability that really stresses her out.”

Drake and West have been feuding ever since Drake’s longtime rival Pusha T, 41, released the song “Infrared” in May off of his album Daytona, which West produced. In the song, Pusha calls out Drake for allegedly using a ghostwriter.

A war of words ensued after the song’s release, with Drake and Pusha exchanging social media insults and diss tracks — the most scathing of which was Pusha’s “The Story of Adidon.” Among his attacks were rhymes mocking Drake’s newfound anger, supposed habit of walking away from relationships, his mother (by name), and one set of lyrics that exposed the fact that Drake had fathered a child with former adult-film star Sophie Brussaux (Drake would later verify the longtime rumors on Scorpion).

In the series of tweets, West, who argued Drake wouldn’t be where he is today without him, claimed the two have been feuding since 2016 when Drake released the song “Summer Sixteen.” He also accused Drake of targeting people suffering from mental illness and contacting his wife and mother-in-law Kris Jenner behind his back.

Drake has not addressed West’s accusations beyond posting crying-tears-of-laughter emojis on his Instagram Story, and a representative for the rapper declined to comment on the tweets.

Although Kardashian West is dealing with stress associated with the feud, she isn’t allowing her emotions to keep her from standing by her husband.

“My husband is the most brilliant person, the most genius person that I know,” she tweeted Thursday. “He has broken so many boundaries, everything from music, stage design, fashion and culture and will continue to change the world.”

Kardashian West also warned Drake to “never threaten my husband or our family,” arguing that West “paved the way for there to be a Drake.” 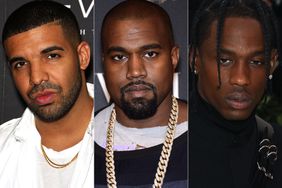 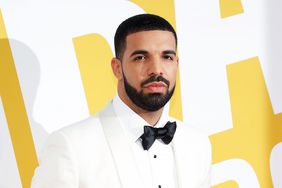 Drake Has Extra Security Outside of His Home in Kanye West's Neighborhood Amid Feud, Says Source 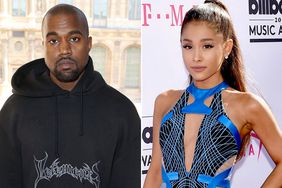 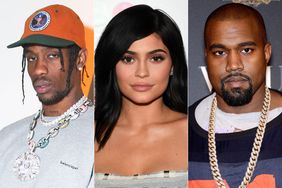 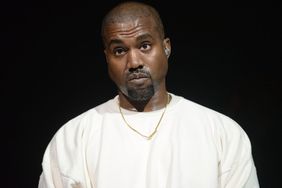