Khloé Kardashian may finally be putting her relationship Tristan Thompson behind her for good.

The couple weathered their first public scandal last April when photos and videos surfaced of Thompson, 27, getting close to other women just days before Kardashian, 34, gave birth to their daughter True. Though the new mom initially forgave the basketball player, they took a downward turn in recent weeks, living apart and spending barely any time together. And it’s only worsened since news broke that Thompson was allegedly once again unfaithful, this time with Kardashian’s sister Kylie Jenner‘s longtime best friend, Jordyn Woods.

Now, a source tells PEOPLE that if there’s a silver lining to this latest drama, “it’s that Khloé will finally be able to move on.”

“Khloé is doing okay. She’s still upset about what happened and talks about it a lot. But it really seems she is able to see what everyone else has been seeing for so long — that she was always too good for Tristan,” the source says. “She deserves so much better.”

“It’s amazing that she for so long was trying to keep her family together for True. It’s been very challenging for her,” the source adds. “But in the end, now that they are 100 percent over, Khloé feels like she did everything she could to be in a relationship with Tristan. Clearly, he doesn’t care about his relationship with her.”

Khloé Kardashian Posts Emotional Quotes Amid Cheating Scandal: ‘That Betrayal Was Your Blessing’

A second source tells PEOPLE that things “never really went back to normal” between the couple since the first cheating scandal.

“She was deeply hurt by him and basically kept him at arm’s length,” the source says. “The only reason she was still seeing him was because of True. The fact that her family is breaking apart is a nightmare for her, but it’s been a long time coming. They’ve been living separate lives.”

“She can’t trust Tristan, and she’s known that for a long time,” the source adds. “She’s been focused on her daughter and creating a loving healthy home for her. She doesn’t deserve this and she knows it.”

The source says that Thompson was a good dad to True when they were together and that’s what made it even harder for Kardashian. But according to the source, Thompson, who plays for the Cavaliers and is based in Cleveland, was never planning to move back to Los Angeles with Kardashian and True.

A source confirmed to PEOPLE on Wednesday that 21-year-old Woods, who was previously living at Jenner’s house, is now “moving back to her mom’s house.”

“It’s been a difficult time and she’s broken up about it,” the insider said. “She’s heading home to be with her mom.”

Multiple sources previously confirmed that the famous family was “blindsided” by reports Woods was seen cozying up to Thompson over the weekend.

And while the alleged tryst feels like a deep betrayal for Kardashian, the rest of the family is hurting as well.

“It’s all a mess now. Everyone considered Jordyn family. She was like a family member and always invited everywhere,” the source said. “The family helped her and wanted her to be able to have a business venture too.”

“Jordyn has been like Kylie’s sister. They were inseparable, and always together,” the source said. “Jordyn often helped Kylie with Stormi. Kylie was always so excited to have Jordyn around. It seems Kylie isn’t sure what to do, but it seems impossible for her to keep Jordyn around.” 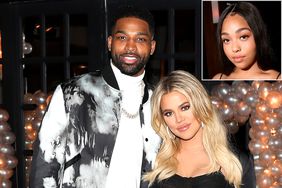