Despite their many ups and downs, Khloé Kardashian will always be connected to Tristan Thompson.

Weeks after PEOPLE confirmed that the couple had called it quits again, a source says the Keeping Up with the Kardashians star remains "very loyal" to Thompson — who is also the father of her 3-year-old daughter True.

"For now, Khloé is single and seems okay with it," the insider tells PEOPLE. "She continues to co-parent with Tristan and they spend time together as a family. Even though he has disappointed Khloé so many times, she is still very loyal to Tristan."

"She doesn't like when people criticize him," the source continues. "He will always be special to her. It's very possible that they will get back together eventually."

In June, PEOPLE confirmed that Kardashian, 36, and Thompson, 30, split amid rumors about the NBA star's alleged infidelity.

According to TMZ and the New York Post's Page Six, which first reported the breakup, the couple parted ways after Instagram model Sydney Chase claimed in April that she slept with Thompson last fall while he was with Kardashian. (Thompson's lawyer denied the allegations at the time, according to TMZ.) The news of the split also came on the heels of a Daily Mail report that Thompson was seen partying with multiple women in Los Angeles.

Though the exes are no longer together, a source told PEOPLE earlier this week that Thompson is "still trying to get Khloé back. He hasn't given up and he doesn't think the door is closed."

A second source said that Kardashian is focusing on the positive as she and Thompson continue to co-parent True.

"Khloé is doing okay. True will always be her first priority and ultimately she's focused on a healthy family for her daughter, so Tristan will always be a part of Khloé's life," the second source said.

The source continued, "She's not one to dwell on the past — she has an incredible capacity to find the positive in every situation. And she and Tristan are still very much in touch and are great co-parents to True."

The pair have weathered their fair share of drama since their relationship was made public in September 2016. PEOPLE confirmed that they were expecting True the following year, but just days before Kardashian gave birth in April 2018, news broke that Thompson had been unfaithful during her pregnancy.

In summer 2020, sources confirmed to PEOPLE that the two were back on, and they spent most of the COVID-19 pandemic together in L.A. with their daughter. 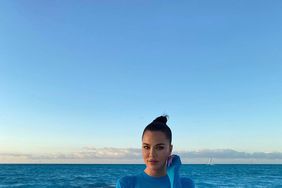