Williams revealed on her talk show that the Hunter Foundation, dedicated to helping addicts, would be dissolved

Kevin Hunter has broken his silence about the dissolution of his and estranged wife Wendy William‘s foundation for addicts.

Hunter, 46, founded the Hunter Foundation alongside Williams in 2014. It was dedicated to providing resources for drug education, prevention and rehabilitation programs and worked to support people as they transition from addiction to recovery.

After Williams, 54, revealed on The Wendy Williams Show last week that the foundation was being dissolved following the pair’s public marital collapse, Hunter is now speaking out to PEOPLE about the state of the foundation.

“Although The Hunter Foundation in its current form will dissolve, the important work will live on,” he told PEOPLE. “I plan on launching a new foundation in the near future to continue the important mission in helping those struggling with drug addiction and substance abuse.”

In addition, Hunter gave details regarding the call center’s fate, which was available for addicts seeking advice and help.

“In regards to the partnership with T.R.U.S.T. and the resource hotline 888-5HUNTER, the call center will go on a brief hiatus beginning May 31st,” he explained. “Since launching in early-March, the hotline has received over 13,000 phone calls and has connected nearly 900 individuals to some level of treatment and care.”

“We will work to partner with other reputable organizations to get the hotline back up and running so that we can continue changing lives,” he added.

In March, Williams announced that The Hunter Foundation had partnered with T.R.U.S.T., an organization dedicated to building a bridge from treatment to long-term recovery, to launch a national resource hotline.

When Williams — who has openly battled substance abuse, even moving into a sober house until recently — revealed the news on her talk show, she noted that she would “remain committed to helping others in the struggles of life.” She also said she would be dedicating herself to “other foundations.”

Wendy Williams Is Dating After Divorce from Kevin Hunter: ‘I Am Rediscovering My Love of Men’

While Hunter has stayed relatively quiet regarding he and his wife’s divorce, a source close to him tells PEOPLE, “He’s focused on getting through this chapter in his life.”

“He and Wendy were married for 22 years and he is focused on being there for their son Kevin, Jr,” the source adds. “He is trying to keep things amicable in terms of the divorce.”

The decision to effectively dissolve the foundation came a month after Williams filed for divorce from Hunter after over two decades of marriage. She has also cut ties with her ex professionally; he was removed as executive producer of The Wendy Williams Show.

The split unfolded after Hunter allegedly fathered a child with his mistress. He broke his silence on the cheating scandal in a statement to PEOPLE last month, admitting he was “not proud of my recent actions.”

A source recently told PEOPLE the exes have “had zero contact” since the split and Williams “has nothing to say to him.” 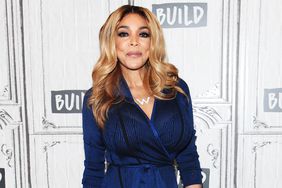