Katie Couric has faced some challenging periods during her career — and a piece of advice she once got from her youngest daughter has stuck with her.

While promoting her new memoir Going There on The Late Show with Stephen Colbert Tuesday, the journalist reflected on the difficulties that arose for her at CBS, which she also details in the book.

Couric, 64, spent 15 years at Today before announcing she would be joining CBS Evening News in 2006, becoming the first solo female anchor of a nightly news broadcast on a major network. Five years later, in 2011, she left CBS amid a ratings decline. On The Late Show, she told Stephen Colbert it was "a really tough experience."

"I think America wasn't necessarily ready for an anchor with lipstick," she said, later adding, "I think that the country — and CBS has the oldest, most traditional audience — and internally, in terms of the DNA of that organization, they were just not that into me."

At one point during her time at the network, Couric broke down in front of daughters Carrie and Ellie after coming home from work.

"I started crying at the dinner table and my daughters, they were like, 10 and 14, they were so taken aback," she told Colbert. "This was after Jay had died and I was a single mom. And they were like, 'What's wrong?' And I was just like, 'I'm having a really hard time.'"

Carrie then pulled out a quote from Kim Cattrall's character in Sex and the City, Couric said.

"Carrie said, 'Mom, remember what Samantha says in Sex and the City ... If I listened to what every b---- in New York said about me, I'd never leave the house,'" Couric recalled with a laugh.

Couric shared Carrie and Ellie, now 25 and 29, respectively, with her late husband Jay Monahan, who died of colon cancer at age 42 in 1998.

She first recalled Carrie's SATC quote in an interview for her PEOPLE cover story earlier this month, joking that it was "so wrong" for her daughter to be familiar enough with the HBO series that she could quote it.

"But it made me laugh," said Couric, who married John Molner in 2014. "And you know, I think you don't go through the death of a spouse or someone you love deeply and profoundly without really understanding what matters." 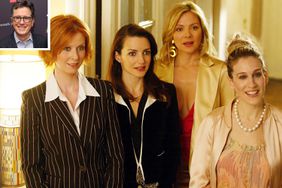