Ellie, 29, wed now-husband Mark at a ceremony in Port Jervis, New York, more than two years after their engagement. Proud mom Couric, 64, has been sharing photos from the event since the pair tied the knot, posting her latest Instagram update on Wednesday.

"Here's to the bride (and of course, the groom 😉)," she captioned a set of pics and videos. "I know I'm biased, but Ellie was absolutely radiant."

Couric went on to reveal that Ellie walked down the aisle to one of late dad Jay Monahan's favorite songs, and that her sister Caroline, 25, later sang Fleetwood Mac's "Songbird." (Couric and Jay married in 1989 and had daughters Ellie and Caroline. In 1998, Jay died of colon cancer at age 42.)

"Ellie walked down the aisle to Ashokan Farewell played by the composer, Jay Unger and his family band," the veteran journalist wrote. "Jay Monahan loved that song, which was used in Ken Burn's series on the Civil War, so it was a way to honor him (Yes, I cried the whole time. Most of the people there did.) Carrie sang Songbird and CRUSHED it."

Couric also uploaded several photos of her with Ellie on her Instagram Story and promised that she would post additional updates as she gathers more footage from the wedding.

"More 'content' to come, I'm making my way through them all!! (PS to all who joined us: DM/text/email me your pics!!)," she concluded in her caption.

The former Today anchor also referenced Jay in some of her captions from earlier this week, writing alongside one post, "Jay would be so proud. Here's to love, here's to joy, here's to the future. ❤️"

"OK friends warning: I'm going to be insufferable for the next few days because I will be sharing wedding photos and videos like a crazy person," she began in another lengthy caption recapping the ceremony and party. "This is the ceremony. It was on the mountaintop of #cedarlakesestate in Port Jervis, New York. Ellie went to @campfernwood in Poland, Maine and wanted a camp like setting. It was perfect. The weather was perfect. (Thank you Jay.❤️)"

The TV personality is now married to banker John Molner, with whom she tied the knot on June 21, 2014 at her private home in the Hamptons.

"It took me a long time [to marry again], because I loved being married and I love being married now," Couric told former PEOPLE editor-in-chief Jess Cagle in 2018. "And I'm not a solitary person. I like company. And John is so funny. He's just got this incredibly dry and wry sense of humor, and he doesn't take himself too seriously. And he's just fun to be around." 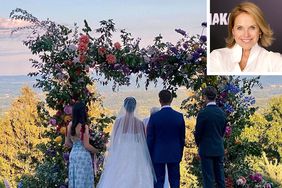 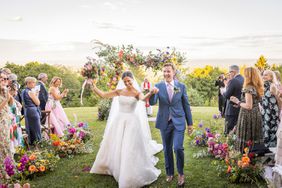