The actress, who played Dr. Izzie Stevens, left the show in 2010 after six seasons

It’s been almost a decade since Katherine Heigl left Grey’s Anatomy — and she hasn’t really looked back.

In an interview with Entertainment Tonight, the Suits actress opened up about whether she would consider returning to ABC’s long-running medical drama. (She played Dr. Izzie Stevens for the show’s first six seasons and left in 2010.)

“I haven’t [thought about Izzie] in years. I don’t know. I don’t know if I would or if I wouldn’t,” she said, admitting that the decision to reprise the role would be a “tough one” to make.

“I almost feel like that would almost be distracting again to, sort of, what they’ve done with that show in the seven years since I left … and what that’s become and what it is to the fans now,” she continued. “It must feel like it would just be kind of like, ‘Yeah, we already let that go … why are you here?'”

As for the upcoming series finale of Suits? Heigl, 40, said she’s not only going to miss being on set of the legal drama, but as a longtime fan, she’s also going to miss watching. (She joined the cast as a series regular last year after the departure of leads Patrick J. Adams and Meghan Markle.)

“I’m going to miss being a part of it, but I’m going to miss being able to watch it, too,” she told ET. “Obviously being on it has changed my viewing of the show because just understanding even the space that they film in and being part of it kind of regularly now, versus watching it on television, has changed my viewership. I don’t know if that’s good or bad. Like, I almost ruined it for myself.”

She added that she hasn’t given much thought to where she hopes her character Samantha Wheeler will end up and is more focused on bidding farewell to her “favorite characters” and costars.

“I am wanting to hopefully just sort of stand quietly to the side and let the people who have really built this show … and have made this family together have their moment to celebrate, to honor, and to be sad, because I know they are,” she said.

The ninth and final season of Suits premieres July 17 on USA Network. Season 16of Grey’s Anatomy premieres Sept. 26 on ABC. 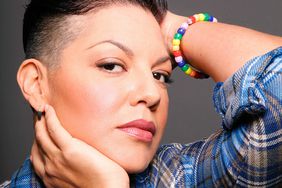