Kaley Cuoco is looking back on her brief marriage to ex-husband Ryan Sweeting.

The Flight Attendant actress, 35, candidly spoke about her abbreviated nuptials in Variety's Golden Globes issue, recalling that she was just starting out on The Big Bang Theory at the time of her relationship.

Cuoco began her breakout role as Penny on the hit CBS series when she was just 21 years old.

"Oh, my God, I don't remember my life before this show!" the actress said.

"And I went through a divorce on the show," she continued, referring to her whirlwind romance with Sweeting. The Golden Globes nominee said she and Sweeting "got married in, like, six seconds."

Cuoco and Sweeting got engaged in September 2013 after three months of dating. The couple tied the knot in December of that year. The former couple then announced that they were splitting up just 21 months later.

According to court documents obtained by PEOPLE at the time, Cuoco filed for divorce citing irreconcilable differences.

Cuoco, who is now married to professional equestrian Karl Cook, told Cosmopolitan in 2018 that Sweeting "completely changed" throughout the course of their relationship and she didn't know whether she'd ever feel ready to walk down the aisle with somebody else again.

"I honestly thought I wouldn't get married again. My ex ruined that word for me," Cuoco said at the time. "I married someone the first time who completely changed. The person I ended up with was not the person I originally met. And that wasn't my fault — that was his."

Despite the hardships, Cuoco said the heartbreak ultimately led her to Cook, who the actress wed in June 2018.

"I knew how much I had to give and how much I wanted to receive. I knew I just had to be patient…I had to go through a lot of things, but it brought me to Karl," she told Cosmopolitan.

Cuoco and Cook, 30, started dating in spring 2016 and made their first public appearance as a couple in September that same year. They got engaged on her birthday in November 2017 after dating for nearly two years.

Earlier this month, Cuoco honored her husband with a sweet Valentine's Day tribute.

The actress shared a snapshot of herself and Cook in honor of the February holiday, posting an Instagram picture of the two embracing and sharing a kiss through matching masks amid the ongoing COVID-19 pandemic.

In the romantic sepia-toned pic, Cuoco shared a comical message for Cook alongside the post.

"Happy 5 years to the weirdest person I know! 🤣♥️ I don't remember a moment before you entered my life.. what a boring life that must have been!" she wrote. "I love you @mrtankcook !♥️♥️♥️." 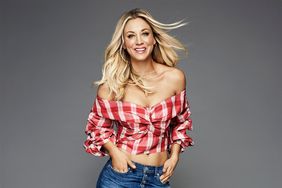 Kaley Cuoco Reflects on Ryan Sweeting Divorce: He 'Was Not the Person I Originally Met'