Justin Theroux Says 'Of Course' He'd Join 'Sex and the City' Revival: 'I Would Love To'

For Justin Theroux, guest-starring on Sex and the City was "a rite of passage" — and he wouldn't hesitate to jump onboard once more.

During a recent conversation with E! News, The Mosquito Coast actor was asked about whether he'd join the upcoming revival if given the opportunity, after previously having small roles as Jared and Vaughn Wysel.

Sex and the City: HBO Exec Hints at Reason for Samantha's Absence in Upcoming Revival

"Let me check my email or see if anyone called. I still have no email from Sarah Jessica," Theroux joked to E! News of his hope about getting contacted to be part of the revival.

Parker, 56, Davis, 56, and Nixon, 54, announced the revival on Instagram in January. Noticeably missing from the announcement was Kim Cattrall, who played Samantha Jones in the original series and two spinoff films.

Speaking with TVLine in an interview published last month, HBO Max CCO Casey Bloys said the creative team behind the project is "not trying to re-do the original show," adding, "They're not trying to say that these characters are reliving their 30s. It is very much a story about women in their 50s, and they are dealing with things that people deal with in their 50s."

Not referring to Cattrall's character directly, Bloys explained, "Just as in real life, people come into your life, people leave. Friendships fade, and new friendships start. So I think it is all very indicative of the real stages, the actual stages of life."

"They're trying to tell an honest story about being a woman in her 50s in New York," Bloys added. "So it should all feel somewhat organic, and the friends that you have when you're 30, you may not have when you're 50." 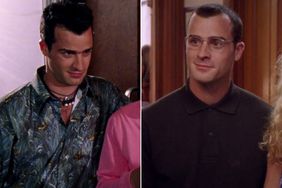 'Sex and the City' : HBO Exec Hints at Reason for Samantha's Absence in Upcoming Revival