The This Is Us actor, 44, paid tribute to his wife on Instagram Saturday in honor of her 32nd birthday. Alongside a loving note, he shared a gallery of photos, which showed the pair enjoying oysters together and smiling at restaurants.

"Happy Birthday to my beautiful Sofia! This amazing woman makes me laugh out loud every single day. Here's to taking down oysters all over the world! I love you very much!" Hartley captioned the post.

Pernas wrote in the comment section, "Can't wait. I love you! 💕"

On May 17, PEOPLE exclusively revealed that Hartley and Pernas, who once costarred on Young and the Restless together, had "recently" tied the knot.

One day before news of their marriage, Hartley and Pernas made their red carpet debut as a couple at the 2021 MTV Movie & TV Awards in Los Angeles, where they both wore rings on their wedding fingers as they posed for photos together.

The couple have rarely been seen in public together since they began dating in summer 2020. A source confirmed to PEOPLE last June that they had been dating "for several weeks." The two actors then made their relationship Instagram official on New Year's Eve.

Hartley was previously married to Selling Sunset star Chrishell Stause for two years before he filed for divorce in November 2019. Their divorce was finalized in February. Just three days before Pernas' birthday, Stause revealed that she is dating Jason Oppenheim, who is Stause's boss at the Oppenheim Group real estate firm where the Netflix series is set.

Before Stause, Hartley was married to his Passions costar Lindsay Korman from 2004 to 2012. They share 17-year-old daughter Isabella.

Earlier this month, Hartley honored his daughter on her birthday by posting a sweet black-and-white selfie of them on his Instagram page. "Wishing this kind and beautiful angel a very happy birthday! I'm so very proud of you! Love, Dad," he captioned the photo. 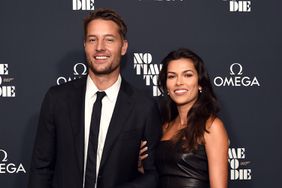