'The Talk' 's Julie Chen: 'My Grandfather was a Polygamist'

The host gets personal about her family's surprising past

It’s secret week on The Talk, and host Julie Chen let a major skeleton out of her family’s closet.

“My grandfather was a polygamist,” she revealed on Tuesday’s show. “He had nine wives, six of who bore him children. He had 11 children that we know of, countless mistresses.”

The 44-year-old, who also hosts Big Brother on CBS, said that her grandfather’s multiple marriages took a serious toll on her grandmother as well as her own mother.

“As you can imagine, this was very hard on my grandmother. It was hard on my mom,” she said. “She never knew when her dad was coming home. She tried to keep this secret from me and my two sisters for a long time.”

“She was afraid it would damage my career goals and reputation. For the record, I did get her permission to tell this secret.”

Chen added that, though she never met her grandfather, he eventually attempted to make amends with at least one of his daughters during his final days. “On his deathbed he apologized to my mom,” she said.

“The secret of my polygamist grandfather is finally off my chest. Thanks for your support,” she Tweeted shortly after the show aired. 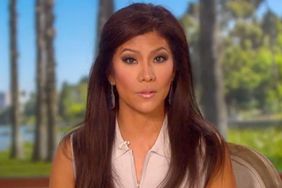 Julie Chen Reveals Family Secret: My Cousin Was Almost Raised as My Brother