Julianne Hough is heading back to the ballroom!

The Dancing with the Stars alum, 33, is set to guest host Monday night's season 30 finale, PEOPLE confirms. She'll be filling in for brother Derek Hough, who is currently quarantining after testing positive for COVID-19.

Despite his physical absence, Derek, 36, will still join the finale virtually. According to Entertainment Tonight, which first reported the news of Julianne's return, he'll appear in a pre-taped segment.

Julianne teased her guest hosting gig on her Instagram Story Monday, telling followers, "I'm super excited because today you may see me do something that you've seen me do in the past — but it's a surprise."

Derek first revealed the news of his breakthrough COVID diagnosis in an Instagram video last week.

"Even though I've been fully vaccinated, I've just been diagnosed with a breakthrough case of COVID," he said. "I just found out and I feel okay. I feel strong. I'm currently taking advice from medical professionals to get better as fast as I can."

"I'm currently in quarantine," he continued. "I'll make sure to keep you guys all updated with what's going on, but I just want to send my love out there to all. Stay safe."

Julianne's return to the hit ABC dance competition show comes about four years after she originally left her post as a DWTS judge.

She first joined the cast as a professional dancer in 2007. She left two years later, then returned in 2014 as a judge, a position she held until 2017.

The Dancing with the Stars season 30 finale airs Monday at 8 p.m. ET on ABC. 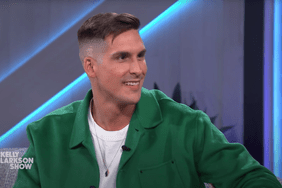