Brooks Laich has been in Idaho since last month, while Julianne Hough stayed behind in Los Angeles

Julianne Hough and Brooks Laich are doing their own things.

The stars, who insiders previously told PEOPLE had hit a rough patch in their marriage earlier this year, are currently living apart as they practice social distancing in different places amid the coronavirus pandemic: Laich has been at their home in Idaho since last month, while Hough stayed behind in Los Angeles.

"In a lot of ways, absolutely nothing has changed — which is weird because for most people, quarantine has either brought you closer together or driven you further apart," a source who knows the couple tells PEOPLE. "But they've largely been living separate lives for so long that it's just sort of more of the same: She's in her place doing her own thing, he's in his place doing his own thing. They're both staying fairly isolated on their own."

"They're just staying apart, again, some more, as usual," says the source, adding that Hough "seems happy with how things are right now."

While Laich, 36, and Hough, 31, were living together in L.A. when the pandemic hit the U.S. in March, Laich headed to Idaho a few weeks later. A source told PEOPLE at the time the ice hockey player was "living the simple life in nature, which makes him happy."

"They are still together, but just not quarantined in the same place," the source said of the couple. "Their relationship has always been like this, though — they like to do their own thing."

During a recent episode of his iHeartRadio podcast, How Men Think, Laich said he had "always wanted to spend more time" at the Idaho property, and given the circumstances, this felt like the perfect opportunity.

"The place needed an overhaul," he said. "It really needed a cleaning — a landscaping and a cleaning. It got overgrown, it's kind of in the bush. … I've really been able to manicure it and landscape it."

"So there's lots to do. And I just love being up here. I've never spent enough time here, so I'm doing okay with it," he continued. "But I've always been that way, even when I was younger. When I was a young kid, I didn't need to be around friends all the time. I liked it, I had great friends, I still have great friends to this day, but there's a part of me that enjoys isolation and there's a part of me that actually gets drained when I'm around too many people."

Hough, meanwhile, told Oprah Magazine's Arianna Davis last month that she's "really enjoying this time where I can connect to what's really important in my life."

"Being on tour for three months and traveling and starting a business … it's a lot. So to be able to be home, and stop and pause, and look inward, and connect back to myself has been glorious. I've been on my own," she said. "My husband is in Idaho doing lots of yard work … and so we're kind of doing our separate things right now. But it's really been a magical time." 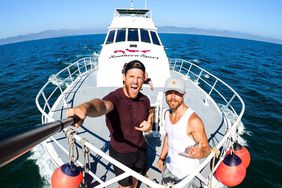 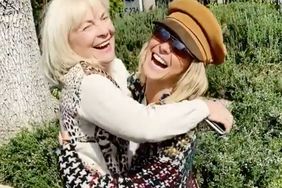 Julianne Hough Surprises Her Mom Marriann with a House for Mother's Day: It's 'Her Time to Receive'