It’s double date night in a galaxy far, far away!

Zooey Deschanel and Jonathan Scott attended the Star Wars: The Rise of Skywalker premiere along with Drew Scott and Linda Phan.

All four stars stepped out on the blue carpet outside the El Capitan Theater in Hollywood, California, on Monday night to pose before watching the anticipated installment of the franchise.

Deschanel wore a pink mini-dress from Shoshanna for the outing, while Jonathan sported an ugly Christmas sweater-styled shirt complete with the likeness of Darth Vader surrounded by candy canes.

Drew opted for a black turtleneck underneath a cream-colored blazer, while Phan donned a silvery high-necked dress, wearing her hair in a classic up-do.

Deschanel and Jonathan, who started dating in September, also posed by themselves and smiled away as Scott wrapped his arm around the New Girl star’s waist, while she posed with one hand on her hip.

The date night comes less than two weeks after Deschanel brought her new beau out on stage with her as she kicked off the Very She & Him Christmas Party tour in Philadelphia. Deschanel is one half of the musical duo She & Him, with M. Ward.

The HGTV star has joined his girlfriend on several stops throughout the tour, and last week proved he’s the perfect Instagram boyfriend by sharing backstage footage from her Oakland, California, show.

He also shared a selfie from the concert on Instagram, writing, “Supportin my girl. Thank you Oakland for supporting @sheandhim. LA…you’re next. #melekalikimaka.”

Jonathan Scott Says He and Zooey Deschanel Will Go Caroling Together: ‘She Is so into Christmas’

A source previously told PEOPLE that Deschanel and Jonathan “bonded” early on in their relationship over a “shared love of music” after becoming friends on James Corden‘s Carpool Karaoke in August.

“He makes her laugh and he’s so sweet to her,” the source added. “And he’s very close to his family and loves children.”

In September, Deschanel announced her split from husband of four years Jacob Pechenik, telling PEOPLE in a joint statement at the time, “After much discussion and a long period of contemplation we have decided we are better off as friends, business partners and co-parents rather than life partners. We remain committed to our business, our values and most of all our children. Thank you for respecting our privacy at this time.” 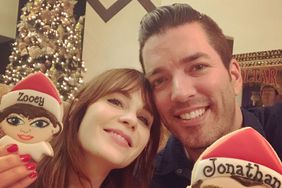 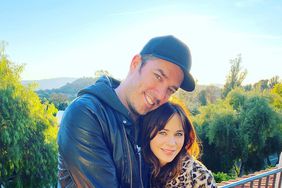