The Bachelorette's JoJo Fletcher and Jordan Rodgers got engaged in 2016, and while they aren't expecting yet, they have names in mind for their future kids.

They might not be expecting just yet, but The Bachelorette’s JoJo Fletcher and Jordan Rodgers know what they want to call their future children.

In an exclusive look at Tuesday’s episode of their web series Engaged with JoJo & Jordan, the 28-year-old Texas native admits they “actually do” have baby names picked out.

“We like Carson,” Fletcher says. “I also really love Fletcher for a first name. Fletcher Rogers is such a cute name.”

But her fiancé isn’t sold on that choice. “We’ll talk about that,” says Rodgers, 30.

The pair, engaged since 2016, also has some other names with familial significance in mind.

“We’d like to add Blair because that’s a maiden name,” Fletcher says of the surname from Rogers’ family. “We have a ton of names for girls because we like that androgynous sort of name, but we don’t have any name for guys.”

Along with opening up about expanding their family, Fletcher and Rodgers also revealed what actually happened during their Fantasy Suite date during season 12 of The Bachelorette, as well as if the SEC Network commentator thinks his fiancée still has feelings for Ben Higgins or any other ex.

“Not at all!” Rodgers assures fans.

And rightfully so. Higgins recently revealed while speaking with Ashley Iaconetti on their Ben and Ashley I. Almost Famous podcast, that he’s dating someone for the first time since ending his engagement to his season 20 pick, Lauren Bushnell. While Higgins, 29, said he’s “excited” about the new long-distance relationship, he’s yet to reveal the name of his girlfriend. 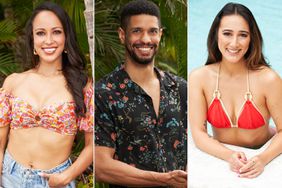