John Stamos and Bob Saget starred on Full House together from 1987-95 and later reprised their roles on Netflix's reboot, Fuller House

John Stamos is struggling to cope with the death of his dear friend Bob Saget.

On Thursday, Stamos, 58, opened up about his grief on Twitter, sharing: "The mornings are hard. Middle of day comes in waves. Mostly bad. Nighttime is hard."

"I miss getting a text from him right now. Me answering. Him saying he's too tired to respond. Me saying, 'Then why'd you text me so early?'" he added to which Saget's widow Kelly Rizzo responded, writing: "I feel this John. ALL day is impossible. And I feel this part too. Bob would text me a question and I'd respond right away and he'd say "I'm busy I can't talk" and I'd say… 'hey! You texted ME!' "

Stamos also shared on Friday, "Today will be the hardest day of my life. God, grant me the serenity to accept the things I cannot change, courage to change the things I can, and wisdom to know the difference."

Saget died unexpectedly on Sunday at the Ritz-Carlton hotel in Orlando at age 65. He had performed a stand-up set earlier Saturday night and was found dead in his hotel room the following afternoon. There were "no signs of foul play or drug use," according to the Orange County Sheriff's Office.

Stamos, who worked with Saget on Full House from 1987 through 1995, first spoke out just hours after news of Saget's death broke, writing: "I am broken."

"I am gutted. I am in complete and utter shock. I will never ever have another friend like him. I love you so much Bobby."

Stamos also honored the late comedian with a heartbreaking tribute on Instagram.

"I'm not ready to accept that he's gone — I'm not going to say goodbye yet," Stamos began. "I'm going to imagine him out there, still on the road, doing what he loves with all his heart and humor."

He added, "He's standing on stage, killing! Another two-hour set in front of a couple hundred of the luckiest people on the planet. They're laughing so hard, they weep."

Stamos continued, "On his way to the hotel, he calls his beautiful, loving wife, Kelly. He says he feels 26 again, alive! Then asks her to fix up a picture he wants to post. She tells him it doesn't need fixing, and tells him how handsome he is. He tells her he loves her with every bit of his heart."

"And when he gets to the hotel to put his head on the pillow, he misses his daughters, his family, his friends. God, he loves us all so much," Stamos wrote. "And he goes to sleep dreaming of when we'll all meet again — and he's smiling. I know in my heart he's smiling, still hearing the laughter from a few hours before."

He ended his tribute with the line, "I'm just not ready to say goodbye yet. Maybe tomorrow. Maybe."

"Thirty-five years ago, we came together as a TV family, but we became a real family. And now we grieve as a family," their statement read. "Bob made us laugh until we cried. Now our tears flow in sadness, but also with gratitude for all the beautiful memories of our sweet, kind, hilarious, cherished Bob."

They continued, "He was a brother to us guys, a father to us girls and a friend to all of us. Bob, we love you dearly. We ask in Bob's honor, hug the people you love. No one gave better hugs than Bob." 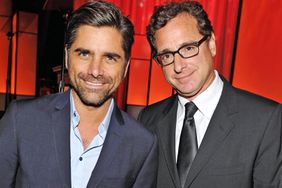 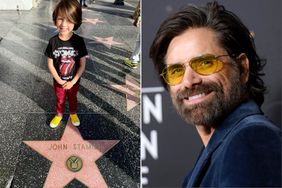 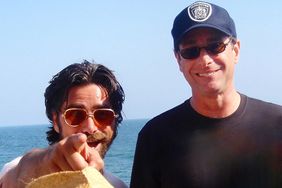