Have mercy! It’s only been five months since Fuller House season 1 hit Netflix, but production for season 2 is already underway.

John Stamos, 52, took to Twitter Friday to share an adorable picture of him and his costars Dave Coulier, 56, and Elias Harger, 8.

“Quick power nappy before taping @fullerhouse w/ the boys,” he captioned the shot of the three snuggling in a twin bed.

Elias, who plays Max Fuller, also took to Twitter to share his own behind-the-scenes glimpse at season 2 of the family sitcom, sharing a picture of himself in the hair and makeup chair while his costars Michael Campion (Jackson Fuller) and Soni Bringas (Ramona Gibbler) goof around in the background.

“Oblivious to the shenanigans,” he captioned the shot.

Despite mixed reviews, fans of the original Full House, which ran for eight seasons from 1987-1995, went crazy for the revival, binging through the night and taking social media by storm.

A premiere date for season 2 has not yet been set. 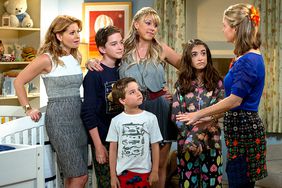 You Got It, Dude! 'Fuller House' Renewed for Season 2