Stamos, 54, first hinted about his relationship with McHugh, 31, during an appearance on The View in March 2016

Wedding bells are on the horizon for John Stamos.

On Sunday, the Fuller House star announced his engagement to model and actress Caitlin McHugh. As fans flood Twitter to jokingly grieve the loss of their childhood crush, here’s a look back at the happy couple’s love story.

Stamos, who was previously married to actress and former model Rebecca Romijn from 1998-2005, first hinted that he was seeing someone during an appearance on The View in March 2016 while he was on tour with the Beach Boys. (The actor has performed in concert with the iconic band since the mid-1980s, typically playing the drums or other percussion instruments.)

“Of all the things I get to do in my life, that is my all-time favorite thing,” he said. “The other night [during a concert], I grabbed my phone ’cause this girl I’m dating … she loves this song, ‘Disney Girls.’ So I put on FaceTime. … I thought I could get away with but people were tweeting, ‘Who are you FaceTiming?!’ ”

Later that month, PEOPLE confirmed the mystery girl was McHugh, 31.

“They have a lot in common. Caitlin plays music and John loves music,” a source later told PEOPLE. “She is a really sweet person.”

In December, PEOPLE Now caught up with a few of Stamos’ costars from the beloved show, who confirmed that there’s definitely a vetting process for the cast’s significant others — and that goes for Uncle Jesse’s girlfriends, too.

As for whether kids are in Stamos’ future? Sweetin, Candace Cameron Bure, and Andrea Barber all agreed that the actor is “the baby whisperer.”

“He’s the best with little babies and little kids,” Cameron Bure said. “So, he should have kids of his own, but if not, there’s plenty of TV children to go around!”

Stamos’ TV wife Lori Loughlin also joked about what goes down when her Fuller House hubby starts seeing someone, quipping that she has to “get a full bio and a picture.”

“And then I approve everyone that he goes out with — and if I say no, he can’t go out with them!” she told PEOPLE with a laugh.

Stamos and McHugh took their relationship to the next level earlier this year, working together to co-write and produce a short film, titled Ingenue-ish, which also stars Josh Peck.

“It’s actually about being an actor in L.A. — it’s basically kind of a roast of myself, the whole thing,” McHugh told Entertainment Tonight in January. “[Stamos] directed it, I’m in it. We wrote it together and we had a lot of fun doing it.”

“They say if you can do a film together, you can do anything together,” she added. “I’m very happy to say we survived the filming process and we’re in editing now. We’re both still alive, so it’s great!”

McHugh said Stamos has been very supportive of her career, calling his belief in her “priceless.”

“I’m very happy — he’s super supportive, and I really couldn’t ask for anything better. He’s very encouraging of anything I want to do career-wise,” she said. “I really appreciate it a lot. You don’t get that with every guy!”

On Sunday, Stamos proposed to McHugh at one of her favorite places: Disneyland! He later revealed the happy news on Instagram, posting a sketch of the two at the theme park.

“I asked … she said yes! …And we lived happily ever after,” he captioned the post.

Stamos’ rep confirmed to PEOPLE that the actor popped the question with a short film of romantic moments from animated Pixar and Disney films, ending the display with The Little Mermaid — which adorably encouraged Stamos to “just ask the girl” moments before he got down on one knee.

He then whisked her to 21 Royal, where they celebrated with their families.

And while fans anxiously await any news of the couple’s upcoming nuptials, don’t expect either Stamos or McHugh to be dropping too many details on social media.

“Wee like to keep our lives private because we’ve seen what relationships in the public eye can be like, and we just like our privacy,” McHugh previously told ET. “We don’t want the commentary from the masses about what our relationship is or should be. We’re very happy together and we hope to be so for a long time.” 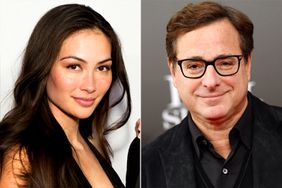 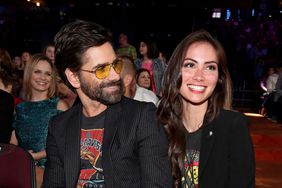