Nikki Bella and John Cena give a tour of their new abode to Brie and her family, including husband Daniel Bryan and their 1-year-old daughter Birdie

John Cena and Nikki Bella are playing house — sort of.

The estranged couple, who called off their engagement just weeks before their planned May 5 wedding, show off their San Diego pad in a new sneak peek of Total Bellas shared by twin sisters Nikki and Brie Bella on their YouTube channel ahead of the season 3 premiere on Sunday night.

There’s no mention of the split in the video, in which Nikki and Cena give a Cribs-style look at their new abode to Brie and her family, including husband Daniel Bryan and their 1-year-old daughter Birdie.

“[This clip] is a lot of fun cause I’m giving you a tour of John and I’s house in San Diego, and it is beautiful,” Nikki says as the WWE Divas introduce the clip. “I think my sister especially fell in love with our wine cellar.”

The look around the house started in the basement’s impressive wine area and also included a glimpse at the not-yet-complete game room, which featured foosball, shuffleboard and a poker table on its way.

Throughout the tour, Nikki held onto her niece, lovingly lifting her in the air and giving her kisses as Cena stood by.

RELATED VIDEO: Nikki Bella Believes John Cena Has ‘100%’ Changed His Stance On Not Having Kids

Before Nikki moved into Cena’s home back in 2013, he made her sign a 75-page cohabitation agreement that said she would have to vacate his home with her things as soon as possible upon their potential split. The pro wrestler also enforced rules including no shoes in the house, no pets, weekly formal dinners and more. However, he became more lax on the “house rules” when moving to their new home.

In a new clip from Sunday’s season 3 premiere of Total Bellas, Cena explained, “Living with you guys for the first time, you want to continue living your life the way it is, so you lay down the law. I was explaining the house because I was certainly very proud of it. I built it from the ground up. I not only wanted to show it to you guys and welcome you in but have it keep its integrity.”

He continued, “This place has a very different feel. It feels like home. So walking in with your shoes on, that’s okay. So is spilling a drink.”

Though Bella called off her engagement in April — three weeks before they were meant to walk down the aisle — due to their differing stances on marriage and having kids, she now “100 percent” believes Cena has changed his stance on one day starting a family.

“I truly think that he wants to be a father,” she told PEOPLE Now on Thursday. “I think John’s going to make an incredible dad. You see everything he does with [the charity] Make a Wish — that’s why I always knew! He’s meant to be a dad. I just need time, I need time to digest.”

They’ve both hinted that a reconciliation is on the table in recent interviews, and the duo were spotted walking together after getting coffee in San Diego on Saturday.

In a photo of the pair obtained by TMZ, the Blockers actor can be seen wearing a red shirt and black shorts while the Total Bellas star wore a color-coordinated red beanie with grey sweater and sweatpants.

Earlier this month, Bella informed fans that she was living with twin sister Brie Bella in San Diego due to the “tough time” with the split.

The new season of Total Bellas premieres Sunday at 9 p.m. ET on E! 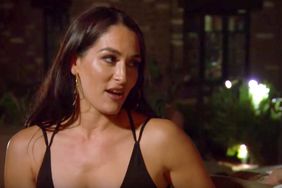 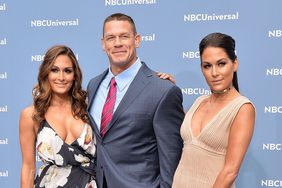 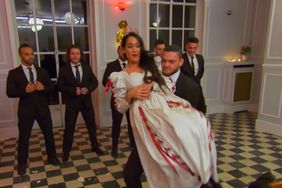 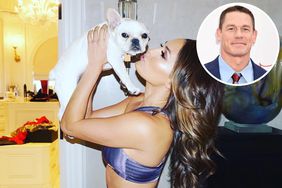