Stranger Things is about to get spookier.

While little is known about the plot of the upcoming season of the hit Netflix show, star Joe Keery is giving fans some insight into what they can expect from season 4. And it turns out, you might want to keep the lights on when they watch.

"Oh man, it's pretty amazing – the Duffer brothers have really done it again," Keery told Total Film magazine. "I think that this year – and I know I say this every single year – but this is definitely going to be a lot scarier than prior years, because last year was pretty dark."

Keery, who stars as heartthrob Steve Harrington on the show, also joked that he has a new look in season 4 after hanging up his Scoops Ahoy uniform.

"I know that costume served its purpose and I'm glad to retire it," he said. "Do I have it at home for Halloween? I don't, unfortunately. They won't let me have that one. One day!"

In March, the cast reunited in Atlanta for the season 4 table read.

Harbour’s return to the series was confirmed earlier this year in the season's first trailer, despite his character Jim Hopper’s apparent death in season 3.

Season 4 of Stranger Things was renewed in September. The show’s third season, which dropped globally last summer on the Fourth of July, boasted the biggest viewership number for a Netflix original series or film in its first days.

Two months after the show’s renewal, the Stranger Things writers room Twitter account shared a post with the first page of the fourth season’s first episode. Written by the Duffer Brothers, season four’s first episode will be titled “Chapter One: The Hellfire Club.”

“looking for new members… are you in?” the account tweeted.

Stranger Things 4 is expected to debut on Netflix later this year. 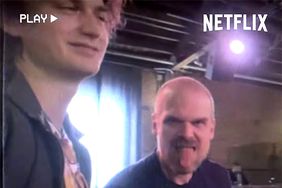 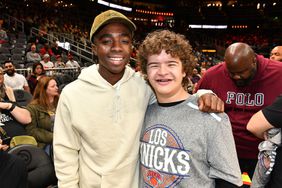