After reuniting in Italy earlier this week, the Giudice family is continuing to document their special time back together.

On Friday, Joe Giudice shared a sweet photo of the entire family, including wife Teresa Giudice and their daughters Gia, 18, Gabriella, 15, Milania, 13, and Audriana, 10, while on an outing together in Sala Consilina, a town in southwest Italy.

The Real Housewives of New Jersey star — who has been living in Italy as he awaits his final deportation ruling — stood in the center of the photo with the rest of his family by his side.

Since being reunited, the family — including Joe, whose new Instagram account went public last Thursday — has been sharing photos of their trip on social media.

Joe, 47, went out dancing with his daughters, showing off some serious moves on his Instagram. “Had the best night with my girls❤️,” Joe captioned a series of photos. “So happy you guys are here my heart is filled.”

The father of four added, “Audriana was too tired.”

Gia posed for a photo with her dad, who captioned the picture, “happy to have u here with me❤️.

Milania also posed for a shot, and was all smiles while hanging out with her dad. “Never been more happy💓💓,” the teen captioned her photo.

Teresa Giudice and Daughters Reunite with Joe Giudice in Italy: ‘We’re Back’

On Oct. 27, Joe appeared in his first television interview since he went to prison in March 2016, chatting via satellite with Teresa, 47, in a Watch What Happens Live with Andy Cohen special.

There, it was revealed that Teresa would be traveling to Italy this week to see Joe, alongside their four daughters. The Giudice family reunion will be documented by Bravo cameras for a RHONJ special, Cohen said.

During the interview, both Teresa and Joe told Cohen that they’re at a crossroads with their marriage, and would not be making any decisions until they spent some time together in person.

“If we stay together, we stay together, if we don’t, we don’t,” Joe said. “It’s a conversation, we’ll see. … As long as she’s happy, that’s all that really matters. I’m not going to tell her what to do. If she doesn’t feel like she wants to be with me anymore, then that’s the thing to do.”

That ruling was made last October. He’s appealed twice so far, and has been denied both times. A final ruling is expected in November. 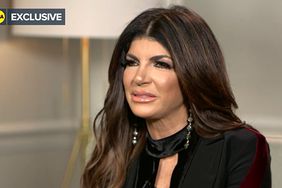