"You're going to have to deal with social media, people will bully you," Sweetin says in an exclusive clip of Pop TV's Hollywood Darlings

Since the age of five, Jodie Sweetin has been living life in the public eye. So, who better to give advice about surviving the entertainment industry to a room full of kids?

In an exclusive clip of Pop TV’s scripted comedy, Hollywood Darlings, the actress, 35, shares her expertise to a classroom full of elementary students who politely ask her to teach them everything they need to know about “the business.”

Reluctant at first, Sweetin pulls it together, and lays it all out there.

She continues: “Second of all, plastic surgery — plastic surgery is a little bit touchy. Some people out there, they kind of need it. You know them when you see them, but I’m going to tell you, if anybody tells you under 16 to have a nose job, don’t worry about it,” she says. “It doesn’t work, it makes you look strange, you’ll grow into your nose later.”

Sweetin, who landed the role of Stephanie Tanner on Full House at the age of five, has had her share of struggles, including a painful crystal meth addiction. Most recently, Sweetin and her ex-fiancé Justin Hodak endured a very public split, in which Hodak was arrested for violating a restraining order she has against him.

Now, the Fuller House star, who is six years sober, continues to work on multiple projects while at the same time being a mom to her two daughters: Beatrix Coyle, 6, and Zoie Herpin, 8.

In a last attempt to offer advice, Sweetin gets down to the nitty gritty.

“You’re going to have to deal with social media, people will bully you,” she admits. “They’ll tell you you’re ugly, you’re fat, you’re stupid. Social media, it’s really f—ed up. It’s going to hurt your soul, it’s going to take a piece of you!”

And as far as the “bad stuff” goes?

“It’s everywhere … you’re going to walk to a party … it’s not worth it … I’m going to tell you this … it’s all going to fall apart,” she says while bleeping on explicits. “Just enjoy the ride.” 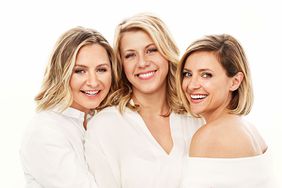 Jodie Sweetin on the Challenges of Being a Child Star: 'People Want to Know Both the Good and the Bad About You'