The couple tied the knot in Denver on Feb. 29

Lane, an investment banker, competed on Kaitlyn Bristowe's season of The Bachelorette in 2015, and also looked for love on the Bachelor in Paradise beach the following year. But it wasn't until he met former NFL cheerleader Hughes, 26, in August 2017 that Lane knew he had found something special.

The couple exchanged vows at the historic Ironworks event venue in downtown Denver, Colorado, where they both live.

"I'm so ready to marry her," Lane, 37, told PEOPLE, days before the nuptials. "My relationship with Kayla is so real and normal. I'm not nervous. I'm just excited."

Following the ceremony, guests gathered at a reception, also planned by Touch of Bliss events, to watch the newlyweds' first dance to "Heavenly Day" by Patty Griffin.

After enjoying dinner from Culinary Creative group, including lobster rolls, lobster mac and cheese and tacos, guests headed back to the dance floor until past 11 p.m.

Tanner Tolbert served as a groomsman and Lane's 8-year-old daughter Gemma, who is his child from a previous marriage, served as a junior bridesmaid.

The bride wore a custom gown by Mindi Linscombe, while Lane wore a Giorgio Fiorelli suit.

Hughes' crystal-adorned heels sparkled just as much as her stunning engagement ring and wedding band.

"We wanted the moment to be equally special for her," Lane told PEOPLE of daughter Gemma, whose mother is Lane's ex-wife. "We wanted her to feel special." Added Hughes: "It was her day too."

"I wanted her to know she was so loved by both of us," said Hughes. "I just want to be a support system and love her as my own. She is officially my first child and I just want to be there for her. So we all said our vows together as a family."

As Lane and Hughes embark upon their lives as husband and wife - beginning with a honeymoon in St. Lucia - the groom joked about one benefit about a Leap Year wedding. "Our anniversary will only officially happen every four years," he said with a laugh. "I'll never forget it!" 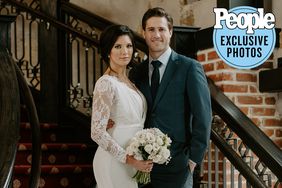 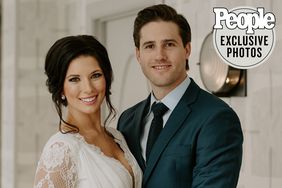 'Bachelorette' Alum JJ Lane Opens Up About His Wedding to Kayla Hughes: 'I Was Fighting Tears'