The stars competed in a hilarious golf game in Jersey City, New Jersey, during The Tonight Show on Wednesday

Jimmy Fallon and Michael Strahan played a golf game unlike any other during the retired NFL star's recent appearance on The Tonight Show.

On Wednesday's episode of the NBC late-night show, host Fallon, 46, and Strahan, 48, faced off in a twist-filled golf game in Jersey City, New Jersey, during a segment called "Playing a Round with Michael Strahan."

Along with the traditional objective of the sport, the stars had to complete a challenge in each of the three rounds of play. The loser of each round was then given a consequence for their failure.

Kicking off round one, Fallon and Strahan were forced to use a pool cue to hit the golf ball, and Fallon bested Strahan.

The Good Morning America co-host went on to complete his consequence for losing: a 22-pushup challenge to promote awareness for veterans in honor of Veteran's Day. Ultimately, Strahan doubled his requirement and did 44 pushups in total.

"Jimmy didn't want to do any, I'm gonna do Jimmy's for him," he joked. "There you go vets, me and Jimmy got you covered."

For the next round, the men had to speak in an Irish accent every time an air horn rang. This round went to Strahan, forcing Fallon to start the third and final round blindfolded.

After Fallon teed off blindfolded, he and Strahan had to complete the final challenge: yell out words that start with the letter f every time they hit the ball.

Screaming out words such as "flan," "fiddlesticks," "Fabio," and "freakazoid," Fallon and Strahan both put up their best efforts for the final round, which was narrowly won by Strahan.

"Told ya I was gonna make it," Strahan said after sinking his final shot.

"You got to be kidding me. That was insane," said Fallon, who went on to perform the final consequence: a dance to BTS' "Dynamite."

As Fallon hilariously danced to the hit K-pop song, he announced that Strahan's new clothing line at Men's Warehouse would be donating full wardrobes to veterans. 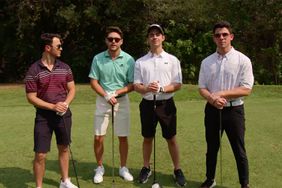 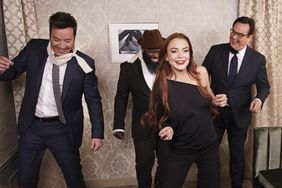 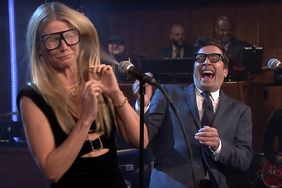