"Marriage has been the greatest adventure of my life," the Modern Family actor says

Jesse Tyler Ferguson and Justin Mikita are celebrating their two-year anniversary after having fun in the sun.

The Modern Family star and his husband have been posting photos of their breathtaking trip to Mykonos, Greece, over the past week, sharing Instagrams of themselves relaxing by crystal blue waters and noshing on grilled octopus. And on Monday, the couple professed their love for each other with pictures from their vacation in honor of their wedding anniversary. (They got hitched in New York City in 2013.)

“Marriage has been the greatest adventure of my life,” Ferguson, 39, captioned a snapshot of him kissing Mikita’s cheek. “Happy two year anniversary to my best friend, @justinmikita.”

Last July, Ferguson and Mikita marked their one-year anniversary with a weekend of dinners.

“We are very excited to start a family,” the actor said at the time. “We don’t have any sort of timeline right now. When you have to look for alternate means, there’s a little more planning that has to go into that, so who knows. When we start the process it might still be a three-year ordeal. We’ll see what happens!”

Viewers will see Ferguson trade the beach for a mountain on Running Wild with Bear Grylls, which airs at 10 p.m. ET on NBC. 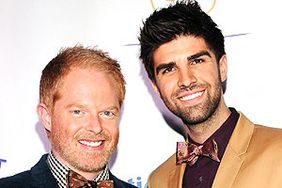