Jennifer Lawrence: Calling Somebody Fat on TV Should Be Illegal

The American Hustle star – who got into a war of words with Joan Rivers last month after criticizing shows like Fashion Police for teaching young people “the wrong values” – is letting loose in a new interview with Barbara Walters.

During an appearance on the ABC News special Barbara Walters: The 10 Most Fascinating People of 2013, the 23-year-old takes aim at people who bash the way women look.

“I just think it should be illegal to call somebody fat on TV,” the Oscar winner says.

Referring to red-carpet critics like Rivers, Lawrence asks, “Why is humiliating people funny?”

“I think the media needs to take responsibility for the effect it has on our younger generation, on these girls that are watching these television shows and picking up how to talk and how to be cool,” she says. “So all of a sudden being funny is making fun of a girl that’s wearing an ugly dress.”

Lawrence recently admitted in an interview with the U.K.’s Harper’s Bazaar that when she first got into acting, somebody told her she was fat and “that I was going to get fired if I didn’t lose a certain amount of weight.”

“If we’re regulating cigarettes and sex and cuss words, because of the effect it has on our younger generation,” she asks Walters, “why aren’t we regulating things like calling people fat?” 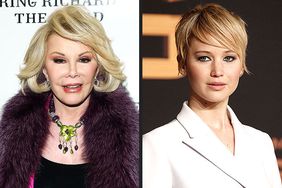