"It was as if they were just too 'above' this, to be on a sitcom," Jennifer Aniston recalled to Howard Stern of a male actor who appeared on Friends

Jennifer Aniston has experienced her fair share of Hollywood personalities over the years — the good and the bad.

While sitting down for SiriusXM's The Howard Stern Show on Wednesday, Aniston revealed that one particular male actor who appeared on Friends had an "attitude" while on set.

"The funny thing is, that male did apologize about their behavior years later, and just said, 'I was so nervous, to be honest, that I wasn't on my best behavior,'" prefaced Aniston, 52, who joined Friends costars Lisa Kudrow and Courteney Cox virtually.

"It was as if they were just too 'above' this, to be on a sitcom. And I remember when we were doing a network run-through, the network and the producers would just laugh. And this person would be like, 'Listen to them, just laughing at their own jokes. So stupid, not even funny,' " Aniston recalled. "It was just like, 'What are you doing here? Your attitude, this is not what we're all about. This is a wonderful, warm place to be, and you're coming into our home and just s------- on it.'"

Host Howard Stern questioned if the mystery actor was Tom Selleck, who had a recurring role as Dr. Richard Burke, Monica's love interest.

"It was Tom," Aniston jokingly confirmed. "You just don't know how cruel and unusual he is. ... Tom has an angel's halo over his head, it's just a permanent halo over Tom's head."

Aniston previously told PEOPLE she "wouldn't change a thing" about her experience on the original series, which ran for 10 seasons on NBC, from 1994 to 2004.

"Nothing to warn or be aware of," she said of the advice she'd give her younger self.

"It's still, to me, one of the greatest jobs I've ever had," Aniston added. "It goes so beyond the work and what the show was, which was, in and of itself, just a spectacular phenomenon, but the friendships and family that came out of it is just — you can't put words to that really. It's priceless." 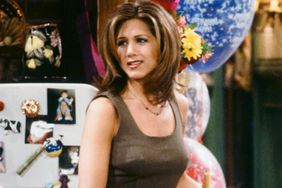