That what friends are for!

Ellen DeDeneres has been celebrating her 60th birthday on star-studded episodes of The Ellen DeGeneres Show throughout the week, and to make things extra special, her longtime friend Jennifer Aniston stopped by to walk down memory lane with the woman of the hour.

After revealing that the 48-year-old actress was the first-ever guest on her talk show 15 years ago, DeGeneres asked Aniston if she remembered the first time the pair had ever met.

“Yeah, I do,” Aniston replied. “I was at your birthday party.”

Although neither of the two women could remember exactly how old DeGeneres had been turning at the time — “I think you were 36,” Aniston said, before adding that maybe Degeneres had been “37, no 38.” — the Cake actress did recall “being absolutely in awe” of her soon-to-be pal.

“You get me in a part of my funny button like nobody else … and my heart” Aniston added. “You are extraordinarily beloved.”

“But that’s why we became friends,” DeGeneres added. “Then I was invited to everything.”

After giving her a quick shout out to the upcoming television series she’s starring in with Reese Witherspoon, Aniston joined the audience in applauding her return to the small screen by performing a very specific clap: the same one used at the beginning of the Friends theme song.

“You still do that clap? Wow,” DeGeneres remarked, before asking her friend if there was any possibility that the cast would do a reunion.

“Anything is a possibility, Ellen,” Aniston replied. “Anything“

“I mean, George Clooney got married … that’s like an anything can happen,” the 48-year-old joked.

Fans were teased about the possibility of a Friends reunion earlier in January, after a conceptual “Friends: The Movie” trailer — which featured snippets of the original cast members in what appeared to be a reunion film — was uploaded to YouTube and quickly went viral, racking up more than 4 million views in 10 days.

But unfortunately for fans of the 10-season comedy series, the trailer wasn’t real.

And despite what Aniston said about “anything being possible,” when Lisa Kudrow, who played Phoebe Buffay on the hit ’90s sitcom, was asked about getting the gang back together for a reunion last year, she shot down the idea.

“Me personally? No,” Kudrow said. “But we have convened, privately, for dinner, and it was great.”

“I don’t see it happening. It would be fun, but what would it be about? Think about it.” Kudrow added. “The thing we liked best about the show was that they were 20-somethings and they were their own family. Now, they all have families, so what are we going to watch?” 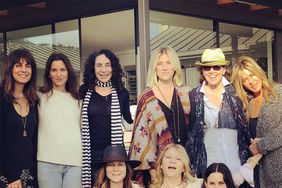