The bride has spoken!

The pair married Monday in front of family and friends in an intimate ceremony at a private Los Angeles residence, says a spokesperson for the couple.

This is the second marriage for both. Russell, 40, shares custody of two children with Franklin & Bash actor Mark-Paul Gosselaar, 38, who got engaged to advertising executive Catriona McGinn this summer.

Probst, 50, will preside over the finale of Survivor: South Pacific on CBS Dec. 18. His self-titled talk show will debut in the fall of 2012. 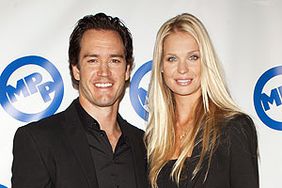