Jason Momoa revealed he first saw Lisa Bonet on TV as a kid and said, "Mommy, I want that one"

Everyone remembers pining over their first celebrity crush — but when you’re Jason Momoa, you actually marry yours.

During an appearance on The Late Late Show with James Corden on Thursday, the Justice League star opened up about his relationship with his longtime love, Lisa Bonet.

Last month, Momoa, 38, and Bonet, 49, wed in an intimate celebration. Although it was assumed that the couple, who share daughter Lola, 10, and son Nakoa-Wolf, 8, married in 2007, they officially tied the knot just weeks ago, a source confirmed to PEOPLE.

“Finally, man,” Momoa said with a laugh, showing off his ring and wedding present — a necklace that took four years to carve — to host James Corden.

Momoa and Bonet met in 2005 at a jazz club in New York City through mutual friends.

“We just happened to be in the right place at the right time,” he said. “I actually had dreaded my hair for her. I had dreadlocks, she had dreadlocks. I literally turned around and I see her and she goes, ‘I’m Lisa.’ I turned around to my friend and I [pretended to scream]. I had f—ing fireworks going off inside, man. I convinced her to take me home, because I was living in a hotel.”

The two shared a meal at Cafe 101 that night.

“We sat down, she ordered a Guinness, and that was it,” he said. “I beyond love Guinness. We had Guinness and grits, and the rest is history.”

On Thursday, Kravitz, 28, shared an adorable photo of her and Momoa.

“Love you papabear,” she captioned the shot. 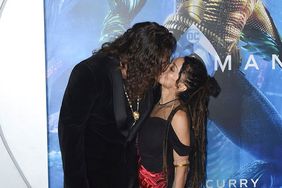 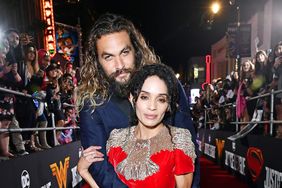 Jason Momoa Knew Lisa Bonet Was the One the Night They Met: 'I Convinced Her to Take Me Home' 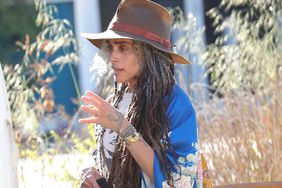