"My self-confidence went down each time he was abusive," Jana Kramer tells PEOPLE of her violent ex

For a decade, Jana Kramer has kept private the terrifying ordeal she endured at the hands of her little-known first husband, Michael Gambino.

But now, the country star is opening up for the first time, in this week's PEOPLE, about her painful history of domestic abuse that landed Gambino in prison for attempted murder in 2005.

"I met Mike when I was 19 at a Coffee Bean in L.A. He was a smooth-talker, very charming, intriguing and obviously older," Kramer, 32, tells PEOPLE exclusively. "At the time, I liked that. I felt protected."

But after they married on a playful whim in early 2004 after two weeks of dating, things soon turned very ugly.

Seventeen years her senior, Gambino developed an abusive routine that led Kramer to sleep in her car some nights or hide in the bushes until he calmed down. Easily angered and frequently jealous, "he'd come home at 3 o'clock in the morning and pick me up out of bed, throw me onto the ground and start yelling and hitting," says Kramer, who hid bruises with makeup and kept the abuse hidden from family and friends.

"Then the next morning he'd be like, 'Hey, baby,' as if nothing had happened."

Then an aspiring actress, Kramer was regularly choked and threatened. "When I said, 'I can't do this anymore' he sent me a photo of my dogs on the freeway and said, 'I'm going to let them go if you don't come home,'" she says. "He'd kick me out of the house, I'd sleep in the car and then that next morning I'd be with him in bed again."

"My self-confidence went down each time he was abusive."

Things escalated to a breaking point on Aug. 6, 2005, when he choked her into unconsciousness and left her bleeding on the gravel outside their L.A. home.

"I remember praying that night, 'Please, just take me away, I don't want to be here anymore,'" says Kramer, who has small scars on her shoulder and arm from that night.

Gambino was convicted of attempted murder and sentenced to six years in prison. He was released in 2010 and committed suicide two years later.

Now a mom to Jolie, her 9-month-old daughter with her husband, former NFL tight end Mike Caussin (from whom she is separated), Kramer is ready to share her whole story.

"I'm so embarrassed and afraid no one will love me because of my past, but I'm ready to put it out there now," says Kramer, who is eager to use her experience to help other abused women.

"If I can help one person, I'll be thankful for what happened — and I can move forward."

For more information or to seek help for domestic violence, contact the National Domestic Violence Hotline 24/7 at 1-800-799-SAFE or go to thehotline.org. 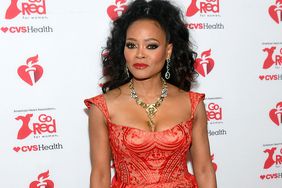