Everything We Know About Jack's Death on 'This Is Us'

Spoiler alert: Our favorite TV dad, Jack Pearson, likely died in a fire, based on the shocking ending to the This Is Us season 2 premiere.

After Jack (Milo Ventimiglia) and Rebecca (Mandy Moore) end their separation and decide to deal with his alcoholism together, the episode cuts to her driving up to a burnt house with bags of his possessions as firefighters surround the scene.

At PEOPLE and EW’s screening and Q&A, the cast alluded to more hints about Jack’s passing, specifically in the scene where teenage kids Kate and Randall hear the tragic news.

“That’s just a piece of the puzzle,” Moore told PEOPLE.

The clues? Kate holding a dog, Randall with a red-headed girlfriend by his side, and Kevin nursing a broken leg leading up to the big monumental event. Rebecca is also wearing a Steeler’s jersey, representing her husband’s favorite football team.

“I’m glad we’ve revealed a little bit to everyone,” Ventimiglia said. “I know people have been asking questions, and I stay silent, because there’s so much I can’t reveal, but I’m glad they know at least a bit.”

RELATED VIDEO: Milo Ventimiglia Teases Jack Pearson’s “Darker” Past: “Why Is [He] That Good?”

Added creator Dan Fogelman said during the panel, “This was always the plan. We talked about the fire and what happened to Jack.” This Is Us airs Tuesdays at 9 p.m. ET on NBC. 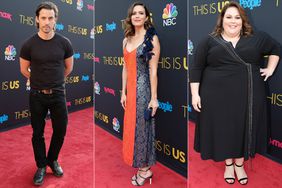