Ireland Baldwin is defending her stepmother Hilaria after the yoga instructor was accused of "pretending" to be Spanish, allegations that went viral on social media over the weekend.

Last week, Hilaria, 36, began trending on Twitter as social media users — including journalist Tracie Morrissey and Twitter user @lenibriscoe — alleged that she has fabricated Spanish roots and a Spanish accent despite being born and raised in Boston, Massachusetts.

Hilaria swiftly addressed the speculation, confirming her birth name is Hillary and explaining that she occasionally "mixes" Spanish or English based on whichever she is speaking more frequently around that time. She also said that she “grew up spending time with my family between Massachusetts and Spain.”

On Sunday, 25-year-old Ireland, whom Alec Baldwin shares with ex Kim Basinger, supported Hilaria on her Instagram Story, calling her "very kind" and adding that she's "a good person, a caring person, who has always respected my relationship with my dad."

"It's so pathetic that anyone would want to play detective and dig that deep into someone's life that they don't know anything about, don't know how they were raised, don't know who they were raised by," Ireland said. "... And the last thing we really need to do is start s--- and gossip about something just so, so stupid."

In the comment section of an Instagram post Hilaria shared on Sunday — a photo of herself breastfeeding her newborn earlier this year — Ireland again defended her.

"I wish people had the chance to know you and know your story the way that I do rather than from a fabricated nine hour long Instagram story," wrote Ireland. "I think you are an incredible mom and an inspiration. ... And I thank God often that the stars aligned and I wound up with a stepmom like you. I had the best time of my life dancing with your chosen family that flew all the way here from Spain to party at your wedding."

"I love you and I find it really sad that people have the time that they do to play detective and make up a lot of lies and fabricate a lot of truths to fit a story. I'm sorry that people are giving you such a hard time during a time that is already so f------ difficult for everyone in this world coping with the realities of Covid and being without family over the holidays and even losing family during the holidays due to this madness."

"I know who you are and I know what you are not and I'm lucky to know you for who you truly are."

Hilaria confirming that she was born in Boston is in contrast to what she has previously said and what was listed on her Creative Artists Agency profile as of Monday, which said she was born in Mallorca, Spain — where her parents now reside. In addition, Hilaria said she moved to the U.S. from Spain at age 19 to attend New York University in an April appearance on the #MomTruths podcast.

And in a 2018 Hola! cover story interview, Hilaria was identified as Spanish while explaining why she was raising her kids to be bilingual.

Twitter users additionally cited an obituary for Hilaria's grandfather David L. Thomas Sr., as evidence that she is not from Spain. The obituary said that Thomas' family's presence in Vermont pre-dated the American Revolution and that frequent travels in Argentina led to the family's later proficiency in the Spanish language. The obituary does not mention Spain.

Hilaria has also frequently done media appearances using a Spanish accent while speaking, including one on Today where she seemingly struggled to remember the English word "cucumber."

In a video message on Sunday, Hilaria said, "Yes I am a white girl. Let's be very clear that Europe has a lot of white people in there, and my family is white. Ethnically I'm a mix of many, many things; culturally, I grew up with the two cultures. It's really as simple as that."

In a follow-up video message the same day, Hilaria said, "I don't really understand why this is turning into such a big thing."

"At this point I'm starting to think I'm being attacked for who I am and no answer is the right answer," said Hilaria, who called the situation "strange" and "frustrating."

"I kinda just wanna say leave me alone. Leave me alone," she added. "I'm not doing anything wrong by being me. Maybe that doesn't look like somebody who you've met before, but, I mean, isn't that the beauty of diversity? ... This is not someone that's pretending to be something else, it's literally just you have two cultures."

A rep for Hilaria did not immediately provide comment to PEOPLE about the allegations. 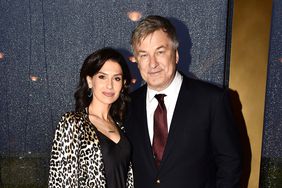 Alec Baldwin Is 'Supportive' of Hilaria amid Controversy over Her Past: He's 'Tried to Cheer Her Up'

Alec Baldwin Wishes 'Love of My Life' Hilaria a Happy Birthday: 'My Everything'