Why Howie Mandel Gave His 'AGT' Golden Buzzer to Singer Joseph Allen: 'I Was Waiting for an Inexplicable Moment'

"The most gratifying experiences are always my golden buzzer moments," Howie Mandel tells PEOPLE of AGT

Howie Mandel has pushed his Golden Buzzer for a deserving and hard-working singer/songwriter.

Mandel, 63, sent contestant Joseph Allen to the live rounds after the 21-year-old Texas native blew the judges and audience away with his original song.

“I was waiting for an inexplicable moment,” Mandel, who is celebrating his 10th anniversary on the NBC hit, tells PEOPLE of his season 14 Golden Buzzer.

“The most gratifying experiences are always my golden buzzer moments because my golden buzzer moments are the most in the moment, emotional and heartfelt,” he says. “The way it looks on the stage with that huge noise and that golden confetti is exactly the way I feel. If you can visualize an emotion, that’s what’s going on in my heart when it happens.”

Allen, who is also a motocross racer and student in Phoenix, Arizona, told audiences that he hopes to inspire others with his music. “I see myself as someone who can make a major impact in the world and I just want to see how much of a footprint I can leave on Earth before I leave,” he said before performing a ballad-rap fusion.

After a successful audition, Allen dropped to his knees and broke down in tears.

As Mandel rose to his feet, he climbed on top of the judges’ table before stepping on the Golden Buzzer with his foot. “You said you want to leave a footprint, well I’m going to give you the footprint you need,” he said before pushing the coveted button.

“Dreams come true on this stage, and I think we’re seeing your dream come true,” said Gabrielle Union, who gave her Golden Buzzer to singer Kodi Lee during the premiere episode.

“I’m literally crying as well. There’s a new generation with millennials and putting out there what is good in this world. I believe you are so good, I’m a fan!” Julianne Hough said.

“You got amazing energy and I like your voice as well. You got a great tone,” Simon Cowell said. “Look, Joseph, first impressions to me are everything and watching you get the reaction before you even started was astonishing. That was an amazing audition. I loved it.”

Mandel recently spoke to PEOPLE about the success of AGT, crediting the Golden Buzzer, which was introduced in season 9, as one of the most unique elements of the series.

“Those moments of relatability, empathy, excitement, dreams coming true, golden confetti are just the formula for success,” he said. “It fires on every possible spark plug that you can fire; it is emotional, it’s exciting, you laugh, you cry, you scream, you’re angry, you’re scared, you bite your nails.” 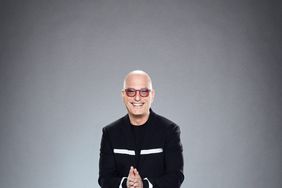