Hoda Kotb Opens Up About Getting Engaged at 55: 'It Is All Right on Time'

"Everything may look out of order, and it kind of feels it a little bit, but it is all right on time," Hoda Kotb tells PEOPLE

Hoda Kotb has been on cloud nine since her longtime boyfriend Joel Schiffman proposed on Nov. 23, and while the NBC co-host says she never pictured herself walking down the aisle again, marriage — and motherhood — couldn’t have come at a better time.

“If someone had said to me when I was a little girl, ‘Hey Hoda, guess what your life is going to be like: When you’re 49 or 50, you’re going to meet the guy you’re going to fall in love with, and you’re going to have children at 55 and 56,’ I would have been like, ‘What?’ It just shows you, the perfect life for you, and this is for me, is exactly as it comes,” Kotb, 55, tells PEOPLE.

“Everything may look out of order, and it kind of feels it a little bit, but it is all right on time,” says Kotb.

The Today show anchor was married to tennis coach Burzis Kanga for two years before they split in 2007. She began dating Schiffman in 2013, after they met through mutual friends at a Wall Street event. In October 2016, the journalist and financier moved in together.

Now, the couple is planning their wedding and raising their 2-year-old daughter Haley Joy, who Kotb adopted in February 2017, and newborn Hope Catherine, who she adopted in April 2019.

When it comes to wedding planning, Kotb says they’ll make their matrimony official “sooner rather than later, because what are we waiting for?”

“We may go back to the place we were engaged in Mexico. Lots of margaritas and Mexican food. Keep the tequila on tap! But, we haven’t thought about it too much, nothing we do is about bells and whistles in that way. If he said let’s do it right now, I would. All I want it to be is fun and happy and everybody to feel easy breezy,” says Kotb.

“No coordinated bridesmaids, just come as you are,” she adds. “That’s the theme of the rest of my life.” 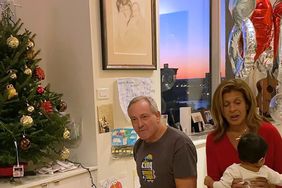