Hoda Kotb is celebrating her latest milestone with her family.

The TV anchor, 55, ushered in a new era of the Today show with co-host Jenna Bush Hager on Thursday, debuting the latest version of the morning show’s fourth hour — now dubbed Hoda & Jenna & Friends — in front of fiancé Joel Schiffman and a live studio audience at their new set inside Studio 6A in Rockefeller Plaza.

As Kotb made her way past the cheering crowd, she became visibly emotional as she spotted Schiffman, 61, sitting in the front row of the audience. The appearance marked the businessman’s first time on the Today show.

“You know when there are big moments in your life? It’s your wedding, it’s your first job, it’s the kids are running around. Sometimes you need to take one second and just literally sit in the moment,” Kotb said once she took her seat on stage. “You guys, thank you for coming, for traveling from all around.”

Hoda Kotb Opens Up About Wedding Plans with Joel Schiffman: ‘We Want to Do It Sooner than Later’

Hager Bush, whose husband Henry Hager was also in the audience, joked, “Y’all know what Hoda said to me on the way in? She goes, this is our wedding day. Joel, we’re practicing for you, okay?”

Visibly moved, Kotb then explained why having Schiffman be at her first taping at the new set meant so much to her.

“When everybody is busy in life, they’re busy. Joel had a really, really, really super busy day at work and I didn’t even ask him to come. I didn’t bring it up, and I didn’t want him to feel bad and say he can’t come so I didn’t bring it up,” she shared. “And then, I sent him a text and said, ‘If you want to come any Thursday.’ And he said, ‘How about this Thursday? I’m so glad you asked.'”

The fourth hour ended with another surprise for Kotb: a cute cameo from her 2-year-old daughter Haley Joy, who ran out on stage to present her mom with a flower.

“I love you, babe,” Kotb said to her child before giving Haley a kiss on the cheek.

Kotb has been dating Schiffman since 2013 after meeting the entrepreneur at a Wall Street event.

Hoda Kotb Opens Up About Getting Engaged at 55: ‘It Is All Right on Time’

In November, she announced her engagement after a romantic beachside proposal.

“Joel got down on his knee and he looked up at me, and we were both crying,” she said of the proposal during an episode of Today last year. “He had tears coming down, and he could barely get it out. He said, ‘Will you be my wife?'”

Kotb said the moment was so emotional that Schiffman didn’t hear her answer at first. 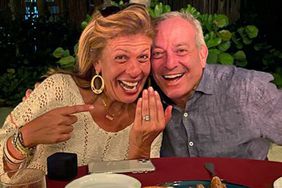 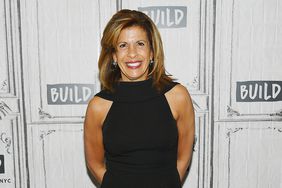